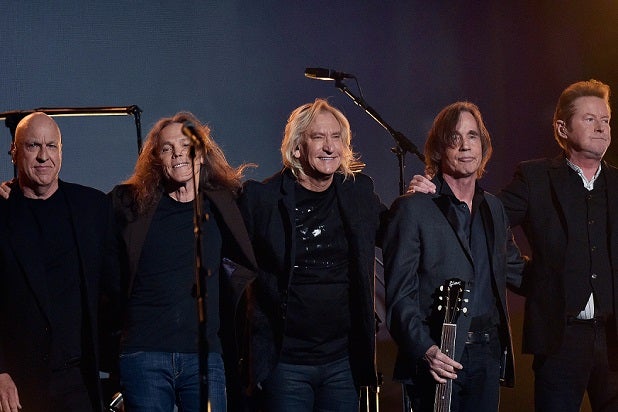 Geez; you sue a guy, and suddenly you’re not invited to his Grammys tribute. That’s some gratitude, huh, Don Felder?

The former Eagles guitarist, who was canned from the group in 2001, took to Twitter on Tuesday to lament his exclusion from Monday night’s tribute to the group’s founding member Glenn Frey at the Grammy Awards.

“Too bad I couldn’t have joined The Eagles last night for the Glenn Frey Tribute at the Grammys but I was not invited,” Felder wrote.

If Felder was surprised at his exclusion from the tribute, he probably shouldn’t have been. After getting axed from The Eagles, he filed suit against Frey and Henley, claiming wrongful termination. The suit was later settled, but apparently not the bad feelings that Felder’s former bandmates held for him.

During Monday’s ceremony, the remaining members of The Eagles were joined by Jackson Browne to perform the group’s hit “Take It Easy,” which was co-written by Frey and Browne.

Frey died in January at age 67 of rheumatoid arthritis, colitis and pneumonia.

Shortly after Frey’s death, the group’s manager Irving Azoff told TheWrap that the musician’s medication played a part in his demise.

Too badI couldn’t have joined The Eagles last night for the Glenn Frey Tribute at the Grammys but I was not invited pic.twitter.com/YhYov7jAFK