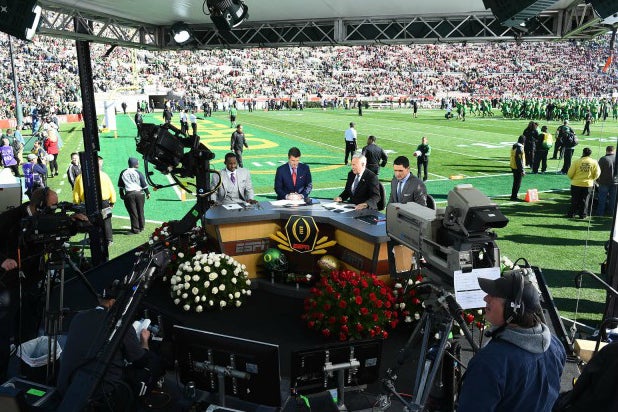 Some fans may still be grumbling over the inaugural College Football Playoffs system, but ESPN is probably celebrating how the new system has worked out thus far. Thursday’s Rose Bowl and Sugar Bowl are now officially the two most-watched cable telecasts in history.

“These record-setting numbers illustrate the enormous fan interest in college football and the wide-ranging appeal of the new College Football Playoff format,” said John Wildhack, ESPN executive vice president, programming and production. “We are excited to build upon this success when we showcase the first-ever College Football Playoff National Championship on ESPN on January 12.”

ESPN programming now holds the largest 18 audiences in cable television history, and 36 of the top 40, the cable channel announced.

The semifinal doubleheader on Thursday rewarded the network with its highest overnight ratings ever for a non-championship game.

In the process, both contests became the highest-rated New Year’s Day college football games on an ESPN network ever. The timeslots saw big jumps from last year’s games, when the playoffs were not in place.

Birmingham, Alabama was the top market for both telecasts, averaging a 39.6 rating for the Rose Bowl, and a 50.2 for the Sugar Bowl. But it won’t be Birmingham fans tuning in to the National Championship on Jan. 12 however, when Oregon will take on Ohio State.

Overall, the coverage generated the highest metered market rating for a bowl game on ESPN in three markets and a record for a non-college football national championship telecast in 15 markets, the cable channel touted.

Overall, the coverage generated the highest metered market rating for a bowl game on ESPN in seven markets and a record for a non-college football national championship telecast in 10 markets, ESPN said.

Look to the finals being a battle between the Columbus and Portland markets.