Peter Jackson was once crowned the "geek God" by the New York Times, and his throng of admirers rose to their feet Friday afternoon as Jackson came to the stage to introduce his latest producing effort, "District 9."

But first, Jackson wanted to clear up rumors about his upcoming project. 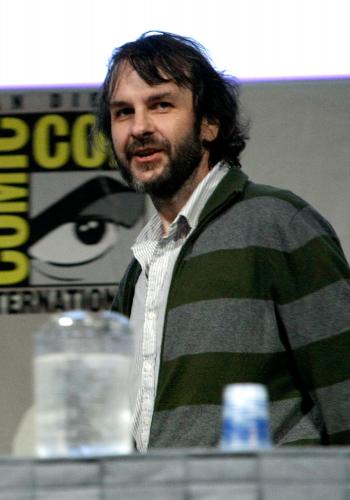 "I know you’re probably gonna have a lot of questions about ‘The Hobbit,’" he said, before promoting his current film. "The film’s not greenlit yet, and once we have a script we can figure out a budget … I know there’s a lot of gossip and speculation about who will be cast, but we haven’t got to the stage to offer anybody a role yet."

The film, he confirmed, is planned for two "epic" sagas.

As he moved on to introduce his cast for "District 9," Jackson heralded the cast and its improvisation skills and then screened a seven-minute excerpt.

Cut to Jackson talking about how he met director Neill Blomkamp.

"For a period of time we wanted to make a feature adaptation of the ‘Halo’ videogame," he said. "With that, we wanted to find a new director who could make a version of ‘Halo’ I’d be excited about … But it suddenly dropped dead on its face due to studio politics."

The flop prompted the two to create a new, original low-budget idea that evolved into "District 9."

With the glitch fixed, the new footage showed a story in which humans are trying to move 1.8 million aliens from South Africa to their home planet. The aliens are insect-like, slimy and green with wormy mouths, and don’t take kindly to the humans serving eviction notices. 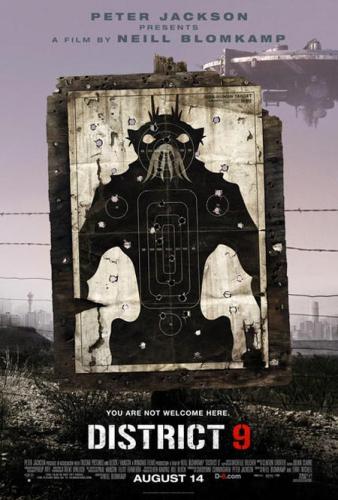 One man accidentally infects himself with what appears to be alien DNA, and his arm slowly transforms into one of an alien. Despite his new limb, the man is still unable to use the aliens’ machine guns and technology properly. Newly sympathetic to the aliens, he wages war with the humans trying to destroy their race.

Sharlto Copley, who plays Wikus Van De Merwe (the guy who turns into the alien) said the film’s concept resonated with him because he hails from South Africa.

"You’re making a movie with no money and a shoestring," he said. "It was intimidating and humbling and inspiring at the same time because there was no way I could have made that situation happen."

Blomkamp said he chose to shoot in documentary style because he wanted to see it in a way that felt as real as possible. He incorporated news clips and surveillance-camera footage to add to the effect.

"Ultimately, it’s a Hollywood thrill ride more than any political statement," he said, adding that he chose to inject the sci-fi plot into South Africa because he grew up there.

The film’s "low" $30 million budget allowed Jackson to give the film freedom.

"Once you deal with big budgets, the movie gets a little bland, and you’re playing to a wide audience," Jackson said. "But this was made for you guys, and it was never made to go outside of the genre … it was a great opportunity."