During the much anticipated, unbelievably overhyped debut of the “Jay Leno Show,” the former “Tonight Show” host made Kanye West do what Taylor Swift, Beyonce and most of the Twittering universe couldn’t: shut up.

In what turned out to be an unintended coup – Kanye had already been booked to perform with Jay-Z and Rihanna – Leno thanked the “jackass” rapper for honoring his commitment, allowed him to apologize to Ms. Swift (“I was rude, period”) and then cut right to the Kanye’s “Glow in the Dark” core. 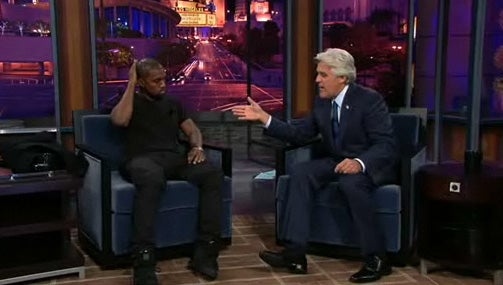 “I was fortunate enough to meet your mom and talk to your mom a number of years ago," Leno told Kanye. "What do you think your mom would’ve said about this?"

Kanye sat, rendered silent for an uncomfortable amount of time, holding back tears before Leno patted his knee (one bonus of the new deskless set). It was the most gripping interview I’ve ever seen Jay Leno conduct.

Oprah, who appeared on the show earlier via satellite in a prearranged bit, would’ve been proud.

It was certainly better than Leno’s interview with his first official guest, Jerry Seinfeld, though the comedian did deliver a few memorable lines about Leno’s non-retirement retirement. “In the ‘90s, when we quit a show, we actually quit,” Seinfeld said. “Not in the Bret Favre-Lance Armstrong double-0s.”

Leno, looking relaxed after just three months off, used his opening monologue to poke fun at the absurd amount of marketing NBC’s done to promote his switch to 10:00. “This is not another annoying promo,” Leno said. “This is the actual show.”

Overall, it featured slightly edgier fare (Leno said “whores”), which was suprising given the earlier timeslot, but his best joke wasn’t blue: Leno, riffing on the government’s “Cash for Clunkers” program, quipped: “I made $5 billion.”

While his desk didn’t make the move, the lame bits did: one, with Leno appearing on “Cheaters,” fell flat; another, with Dan Band frontman Dan Finnerty, who Leno said he discovered this summer (apparently Leno never saw “Old School”) was just as bad. A fake interview cut from Obama’s “60 Minutes” appearance was, unsurprisingly, unfunny.

Leno’s return was noticeable elsewhere on the network. In New York, NBC’s late local local news — which was teased in "After Jay" commercials incessantly — recapped the show’s highlights.

Conan O’Brien, opening the “Tonight Show,” said: “Tonight I’ll be doing all the jokes Jay Leno didn’t have time for.”