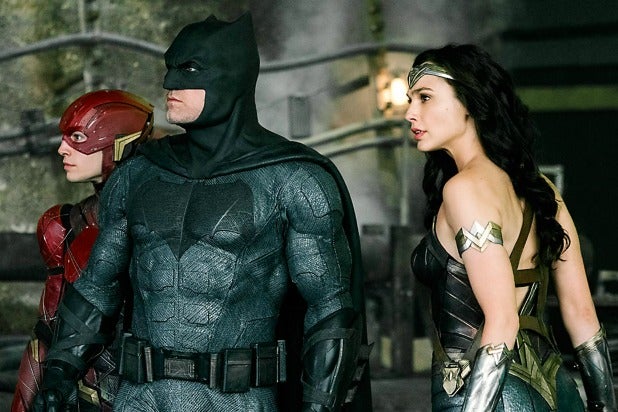 His repeated, enthusiastic gushing about the role was surely intended to refute published reports from earlier this week that he and Warner Bros. are looking for a way to let him exit the role “gracefully.”

It’s still unknown how much truth there was to those reports; suffice to say it would present a huge problem if Affleck does end up leaving the live-action DC universe.

But with the reveal during the same panel that Warner has settled on “Flashpoint” as the title and concept for its upcoming movie about superhero The Flash, the studio may have landed the perfect solution to that problem should the need ever arise.

Replacing actors is almost never done with any subtlety, and certainly not with overt acknowledgement that any change has even occurred. The results are often mixed too.

Both Val Kilmer and George Clooney played Batman in the same continuity as Michael Keaton’s version of the character, but their films were widely derided by critics and fans. And in Clooney’s case, “Batman & Robin” was a major box office disappointment that led Warner Bros. to kill that incarnation of the franchise.

On the other hand, Marvel’s decision to fire Edward Norton and recast The Hulk with Mark Ruffalo paid off big after Ruffalo’s take on the character became a hit with audiences and critics. But Affleck’s profile in the DC Extended Universe is far bigger than Norton’s was in the Marvel Cinematic Universe.

Also Read: What is 'Flashpoint?' Everything You Need to Know About Reimagined 'The Flash' Movie

Only two franchises are really built around actor replacements: “Doctor Who” and James Bond. But “Doctor Who” uses the concept of “regeneration” to recast in-universe whenever an actor wants to leave the role. James Bond traditionally recasts the role along with what amounts to a soft reboot — and save one actor, the franchise got a hard reboot in 2006 with Daniel Craig’s version of the character.

Neither one of those options is available to Warner Bros. But thanks to “Flashpoint,” if the studio really wants to replace Affleck, it now has a way to have its cake and eat it too — go back in time and change the timeline.

That’s a possibility presented by “Flashpoint,” which served as the launching point for DC Comics’ line-wide continuity reboot called “The New 52.” And it could serve the same role for the DC live action films.

(Warning: Spoilers ahead for the “Flashpoint” comic miniseries, and possible spoilers for the film.)

Also Read: Ben Affleck Doubles Down on 'Justice League' Future: 'I'm So Thrilled to Be Batman'

You can read more about it in detail here, but the gist is this: In the tragic backstory of Barry Allen (The Flash), his mother was murdered under mysterious circumstances when he was a child and his father was framed for the crime.

As an adult, Barry uses his speedster powers to travel back in time and stop his mother’s murder. When he returns to the present, his mother is still alive but the world is a nightmare, and he must do everything he can to set things right… or as close to right as possible.

The upshot of all of this: Batman, well, a version of Batman, plays a huge role in the story.

Remember how Bruce Wayne became Batman because his parents were killed in Crime Alley by a petty criminal? In the new “Flashpoint” reality, Thomas Wayne — Bruce Wayne’s father — survived and Bruce was the one killed, sparking Thomas to become Batman. This Batman teams up with The Flash to set reality right.

But in the end, the Flash doesn’t manage to restore the previous timeline, just an approximation of it. Once again, Bruce Wayne is Batman, and the “Flashpoint” continuity’s nightmarish qualities are gone. But everything is different in both slight and significant ways, and thanks to his superpowers, only The Flash remembers.

That’s the perfect scenario for Warner to “gracefully” allow Ben Affleck to leave the role. Barry changes the timeline and the answer to every question from “Who is president?” to “What does Bruce Wayne look like?” is radically different.

But since The Flash remembers, a moment that could otherwise come off as a crude business decision now has poignance. One can imagine plenty of other elements that could be discarded in the same stroke, but at the same time, WB and DC can keep whatever other aspects of the current DCEU they like. (For instance Gal Gadot as Wonder Woman).

The best thing about this hook is that Affleck could appear in the film to send his own version of the character off into the sunset and pass the torch to the next version at the same time. It would be easy for him to appear in the beginning of the film — hell, you could also cast him as Bruce’s father, Thomas — and then introduce the new Bruce Wayne/Batman when The Flash returns to the “restored” timeline.

All that has to happen is for Barry (Ezra Miller), to give a sideways look, or even a wry comment acknowledging for the audience that things are different. Ka-blammo — you pay tribute to Affleck’s performance, and allow him to exit with dignity at the same time.

To be honest, I like Affleck as Batman and hope he sticks around. But if he wants out, or if Warner wants him out, “Flashpoint” provides the ultimate face-saving way to do it.

Umberto Gonzalez‏ contributed to this article.

Fanboys are buzzing about the new Alex Ross style one sheet

Warner Brothers has revealed a new "Justice League" poster ahead of its Hall H presentation at San Diego Comic-Con on Saturday morning. The new poster is in the vein of comicbook artist Alex Ross' classic DC comicbook covers. The poster unveiling comes on what is arguably the biggest day for the DC Extended Universe since its launch. Along with its highly anticipated San Diego Comic-Con panel, Warner Bros. and DC Films' latest film, "Wonder Woman," will today pass "Guardians of the Galaxy Vol. 2" to become this summer's highest grossing film at the domestic box office. After its eighth Friday in theaters, "Wonder Woman" has a domestic total of $386.5 million, compared to $387 million for "Guardians of the Galaxy Vol. 2" Warner Bros. is expected to unspool the latest trailer for "Justice League" at Comic-Con today, when DC Entertainment does their presentation Saturday morning inside Hall H. The first footage ofÂ Jason MomoaÂ from his standalone "Aquaman" film will also be showcased. Directed by Zack Snyder, "Justice League" starsÂ Ben AffleckÂ as Batman,Â Gal GadotÂ as Wonder Woman,Â Henry CavillÂ as Superman,Â Jason Momoa as Aquaman, Ezra MillerÂ as The Flash, Ray Fisher as Cyborg,Â Jesse Eisenberg as Lex Luthor,Â Jeremy IronsÂ as Alfred,Â Amy AdamsÂ as Lois Lane,Â Amber HeardÂ as Mera,Â J.K. SimmonsÂ as Jim Gordon andÂ Kiersey ClemonsÂ as Iris West. Julian Lewis Jones andÂ Willem DafoeÂ are also set to appear. "Justice League" hits theaters Nov. 17, 2017.