The story of terrible opera singer Florence Foster Jenkins is such a good one, you wonder why it has never been told on screen before. I recall a 2005, Olivier-nominated West End stage adaptation called “Glorious,” starring Maureen Lipman, but now, with that strange synchronicity peculiar only to cinema and London buses, two movie versions about the wealthy Manhattan prima donna come along at once.

Xavier Giannoli’s fictionalised and stylized account, “Marguerite,” has been charming French audiences for a while now, earning its actress Catherine Frot a deserved Cesar in the process. Now comes Stephen Frears‘ more historically faithful “Florence Foster Jenkins”: Set in New York in 1944, the last year of the deluded chanteuse’s life (with Liverpool standing in for wartime Manhattan), and populated mainly by British character actors  like John Sessions, Allan Corduner, Stanley Townsend, Christian McKay and that consummate stage farceur David Haigh buzzing around queen bee Meryl Streep in the title role, it’s like a funny, musical take on “The Iron Lady.”

Both films about the socialite singer approach their subject with such affection that they transcend biography. While “Marguerite” plays with delusion and tragedy, Frears’ film tiptoes more daintily into farce and poignant comedy, recalling this ever-adaptable director’s previous dalliances with backstage theatrical fare such as “Mrs. Henderson Presents,” starring that other grande dame, Judi Dench. Indeed, you can see “Florence Foster Jenkins” enjoying a similar trajectory and ending up back on the stage as a musical sometime soon.

Streep’s first entrance is a hilarious dangle in an amateurish revue for her upscale Verdi Club, where she’s lowered on a rope playing an angelic muse of inspiration for her own father. Florence is energetically supported in her musical endeavors by her husband, the failed Shakespearean actor and “eminent monologuist” St. Clair Bayfield, played with renewed vigor by Hugh Grant in by far his best and most committed performance since, oh, his voice work in the animated “The Pirates! Band of Misfits.” Grant’s work is typically charming, giving elegant life to such phrases in Nicholas Martin’s script as, “I doubt even Mrs O’Flaherty can slurp a trout.”

Florence’s wealthy eccentricities — including a collection of chairs “in which notable people have expired” — become a source of mirth,  as does her whimsical hiring of pianist Cosmé McMoon, played with a simperingly likeable vulnerability by “Big Bang Theory” star Simon Helberg. 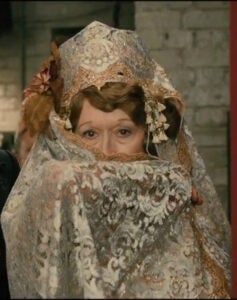 Grant walks the tightrope with considerable skill, ushering in the changes of tone with beaming, rictus reaction shots while he throws a protective ring around his beloved “Bunny.” The fact that there appears to be genuine affection and love here is what gives the film its emotional core, even while Grant’s St Clair is shacked up in Brooklyn with a mistress, Kathleen, played by the beguiling Rebecca Ferguson (“Mission Impossible: Rogue Nation”) — in an apartment paid for by Florence, no less.

And then we come to Streep. Again, she delivers an imperious performance, incorporating comedy, tragedy, musicality and tenderness. She’s sung before, of course, in “A Prairie Home Companion,” “Mamma Mia!” and, most recently, “Ricki and the Flash,” but never quite so badly, which requires far more skill. She mangle the music so brilliantly that we laugh ourselves silly at Florence’s operatic stabs. Her trills sound like a puppy playing with one of those squeaky toy bones, and we can’t help our chuckles, aided by Streep’s inimitable blend of old-school mugging and delicate fragility. We laugh, certainly, but feel guilty about it.

Streep does all her own bad singing here, a remarkable feat; it is very hard to sing that awfully on purpose, and her twinkling commitment to the part is, as ever, a thing of wonder. Aided by Consolata Boyle’s elaborately faithful costumes, we get a real feel for the self-created world the rich Manhattanite is capable of weaving around herself in the service of her dreams.

Also Read: How Meryl Streep Got Slapped into Stardom by Dustin Hoffman

To a certain extent, those dreams are fulfilled in the climactic concert at Carnegie Hall, an event that in Frears’ hands becomes a torrent of conflicting emotions, from hilarious to tragically miscued. As Cole Porter and Tallulah Bankhead attend the finale event, I was reminded several times of a Woody Allen film — the segment of “To Rome With Love,” with the opera singer who can perform only in the shower, comes to mind, as does “Bullets over Broadway” — in the deceptively masterful simplicity of Frears’ direction. In this age of blockbusters and superhero face-off mayhem, it reminds us that unfussiness is a virtue.

Meanwhile, St Clair makes it his duty to keep the “mockers and scoffers” at bay, going to extraordinary lengths to load the audience with admirers and to bribe leading newspaper reviewers. It is not without irony that this review is embargoed until after the London premiere, lest any negative reviews burst the bubble and cause distress. They needn’t have worried about poor, sensitive, deluded Madame Florence, or at least the people who have brought her back to life on screen: this is a fine, funny and moving film tribute to the efforts and passions of its titular heroine, a woman who lived out her dreams, at any price.