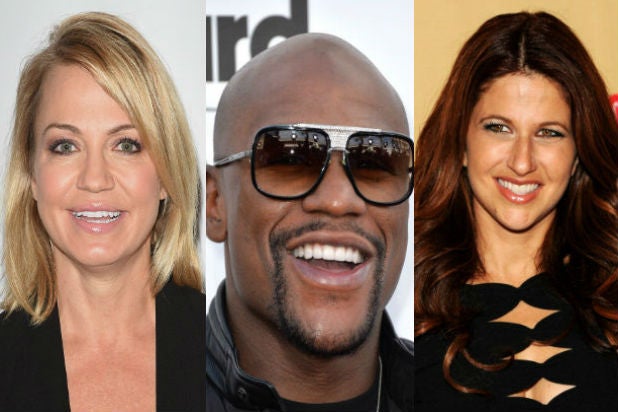 HBO Sports eventually got Beadle’s credential restored, but she had already returned to Los Angeles and says she does not plan on returning to Las Vegas for the fight.

The reporters confirmed the news on their respective Twitter accounts. Nichols wrote, “No fight for me or [Beadle]. Mayweather’s team told my producer the camp was blocking my credential.” Beadle tweeted, “I, along with  have been banned from the MGM Grand Arena for the fight tonight by the Mayweather camp. #TheFightGame.”

Both correspondents have spoken out against domestic violence in the past. Nichols conducted an interview with Mayweather in 2014 in which she repeatedly asked him about his history of domestic abuse.

See Photos: 17 of the Most Dramatic Sports Movie Moments: From 'Rocky' to 'McFarland, USA' (Photos)

Beadle, meanwhile, spoke out against domestic abuse in the wake of the Ray Rice incident in which the football star was caught on security video punching his wife in the face.

Mayweather’s publicist, Kelly Swanson, refuted the allegations in tweets of her own. Read them below:

No one including ME banned @Rachel__Nichols from covering the fight. She is already credentialed. #Facts

And @MichelleDBeadle isn’t even on the press list. She’s credentialed through @HBOboxing. Yes credentialed. #Fact#2 — Kelly Swanson (@kellyswanson1) May 2, 2015

Sports Illustrated reporter Chris Mannix tweeted that the most recent press seating chart for the event lists two CNN reporters, neither of which are Nichols. Read his tweet below.

SI has obtained a copy of most recent seating chart circulated by promoters. Two CNN talent listed as credentialed. @Rachel__Nichols is not.

Nichols released a statement on the matter, which read:

“After asking tough questions of Floyd Mayweather on my program, I was not offered press credentials to cover tonight’s fight. In an email dated April 23, I was told I would only be credentialed for the run-up events through the week, but in bold, italic letters the email stated “you do not have any access Saturday to any services or events.” A CNN producer revisited the issue with the Mayweather camp on April 29, confirming to Mayweather’s publicist that I would be in Las Vegas, and the publicist replied that I would still be denied a fight night credential. I was told the same thing when I arrived at the credential office in person on May 1, by two separate officials, in front of several other people. It doesn’t surprise me that now, after facing significant backlash, the Mayweather camp has reversed its position. But despite this, and other outside parties generously offering me their seats, I will not attend the fight. I will also not let fear of retaliation prevent me from asking the tough questions the public deserves answers to in the future.”