"Food, Inc." became a different film than the one I intended to make.
I thought it would be fascinating to look at how our food gets to the table — from different points of view. On the one hand, we spend less on food today than at any other time in history. We can eat what we want, when we want it, regardless of seasons. On the other hand, this food has hidden costs that we’re all going to pay for down the line. 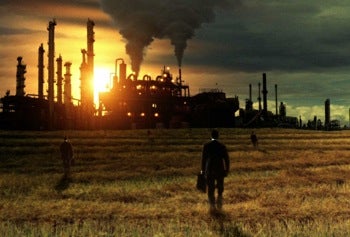 Industrial food production pollutes the water, robs nutrients from the soil, exploits the workers who grow and process the food, exploits the animals, and ultimately, it makes people sick. Seemed like fertile ground for a film.
As I started filming, I was not prepared for the stonewalling I’d get from the food industry. I wanted them to argue the benefits of the industrial system. I wanted to understand their point of view, but for the most part, the industry said no. In doing so, the film started to move in a different direction.
I became intrigued by why the industry would not speak to me about something as seemingly innocuous as food. What I discovered is that a handful of companies essentially control the food supply. They exert tremendous power over what we eat and how much – or how little — we know about it.
I was stunned by the lack of transparency, the intimidation of critics, the influence over government. It felt like we were onto something bigger than food.
But would anyone care?
Apparently, yes. "Food, Inc." hit at just the right moment when people were interested and ready to listen. It benefitted from the groundbreaking work of authors Eric Schlosser and Michael Pollan, and from food activists who have worked for years to raise awareness. And the press took great interest in the film, which helped spread the word.
The response from the industry was less enthusiastic.
It was quiet at first. They thought no one would care so better to ignore us. But as the audience for the film grew, the industry had to respond.
They started by dismissing "Food, Inc.’s" arguments as elitist and naive.Then they tried to discredit the film, launching websites that used strong rhetoric seemingly designed to pit us against the Great American Farmer and the forces of progress. But these attempts didn’t stop the momentum of the film.
Slowly, the tone began to change. On an episode of "Nightline," Richard Lobb, the spokesman for the National Chicken Council (who also appeared in the film) said that in retrospect the industry should have been more receptive. A recent Business Week story notes that Monsanto CEO Hugh Grant now says he should have commented in "Food, Inc."
And lastfall I was invited by the Center for Food Integrity, a group of food industry heavyweights, to attend their annual convention. I agreed to go to Kansas, though I feared I’d be walking into the lion’s den. I ended up having productive conversations with people from the very companies that refused to participate in the film when I approached them.
They seem to be waking up to the fact that consumers have lost trust in them, and they need to do something about it.
I believe that "Food, Inc.," along with a growing food-reform movement, is exerting pressure on the food industry to change. But can giant corporations ever change enough to place public health before the bottom line?
I’m reminded of the famous quote from Mahatma Ghandi: “First they ignore you, then they laugh at you, then they fight you, then you win.”
I’m not sure we’re winning, but I am sure we can no longer be ignored.
BIO Robert Kenner
Award-winning filmmaker Robert Kenner worked for over six years to bring "Food, Inc." to the screen. Prior to directing that, Robert received the 2006 Peabody, the Emmy for exceptional merit in Non-Fiction Film-Making, and the Greirson (British Documentary) for his previous film "Two Days in October."

Award-winning filmmaker Robert Kenner worked for over six years to bring "Food, Inc." to the screen. Prior to directing that, Robert received the 2006 Peabody, the Emmy for exceptional merit in Non-Fiction Film-Making, and the Greirson (British Documentary) for his previous film "Two Days in October."
x
Looks like you're enjoying reading