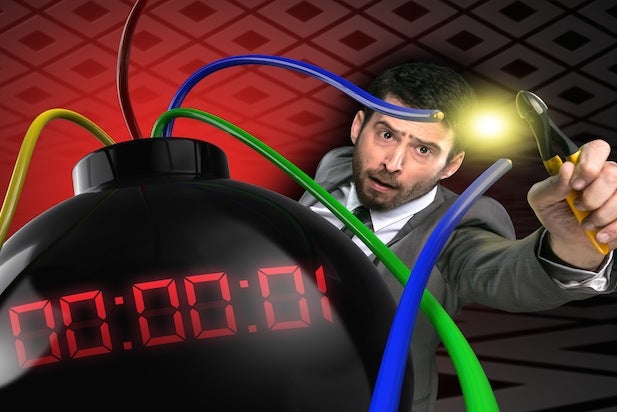 Tension is high at Fox over the green-lighting of “Boom,” a reality show about defusing fake bombs from the network’s new alternative entertainment executive vice president, Simon Andreae, with some executives uncomfortable at the tone and timing of this and other early shows he has backed, TheWrap has learned.

Sales executives have pushed back within the network over “Boom” being greenlit last week close to the one-year anniversary of the Boston bombing on April 15.

“The ad sales department was vocal and let everyone know that they will not be able to, or attempt to sell a single sponsor on this idea,” a network executive who declined to be identified said.

The executive characterized the reaction in sales as a “meltdown,” coming just two weeks before the network’s upfront presentation to ad buyers.

But a network spokeswoman denied that there was internal strife about “Boom,” telling TheWrap, that it was “patently false.”

“Anytime you have an out-of-the-box concept, there’s going to be internal discussion around sales — that’s simply the nature of the broadcast TV business,” said the spokeswoman. “We are extremely excited about the new unscripted series we’ve ordered — many of which were pursued by multiple networks — and we feel they have the kind of distinctive, irreverent tone that will energize our reality slate.”

But one ad buyer told TheWrap that the tone of the show could be off-putting:

“That’s a great example of how content covers a wide array of circumstances – these people are clearly not being blown up, but this whole idea of a bomb can be in poor taste and I could see a whole range of clients that could say, ‘I don’t want to be involved in it because of the potential backlash,'” said Sam Armando with Spark, the media buying arm of Starcom MediaVest Group.

Keshet, the Israeli company behind “Boom,” has been shopping the format during the MIPTV conference in Cannes. In addition to Fox here in the U.S., it has also placed the format in Spain, France and Belgium. The reality show is set around teams of four confronted with a fake bomb ticking and contestants cutting wires until they and some money are “blown up” with the set shaking and special effects simulating an explosion.

Employees have balked at Andreae’s (pictured above) statement in the show’s announcement to press that “Boom” is “family entertainment.”

The network insists that the show is much more light-hearted in tone than it might initially appear, and involves slime rather than anything resembling a bomb. However, insiders told TheWrap that the feedback from the sales department was “swift and harsh inside Fox.”

Further adding to the department’s difficulty with selling advertising for the show: next week’s one-year anniversary of the Boston Bombing on April 15; sentiments regarding American service people whose lives are threatened by IEDs, and the fact that Fox’s upcoming upfront presentation to advertisers will take place in New York City, the city where the World Trade Center was destroyed.

The network does not plan on presenting “Boom” at upfronts, an individual with knowledge said.

Other shows being backed by Andreae, who replaced outgoing Fox reality chief Mike Darnell, are sparking complaints internally. “Couples Retreat,” a cast-contingent pilot in which couples switch partners during a romantic getaway — is considered by sales executives and others internally as being in bad taste.

“Couples Retreat” was the center of recent internal strife when it was revealed that a casting notice for the show was distributed that offered $30,000 to married couples and stated “no children preferred.” That struck employees as another example of Andreae’s bad taste: paying couples to potentially cheat on their partners, and inferring that it may be acceptable that they have children.

The notice has since been pulled. See it below.

“Fox may say that this was the work of an overzealous casting person, but it defies all logic that a casting person could authorize the advertisement of this kind of offer,” the insider said.

Aside from “Boom” and “Couples Retreat,” Andreae has greenlit “I Wanna Marry Harry,” in which young women are made to believe they’re battling to win a date with Britain’s Prince Harry when instead they’re dating a lookalike.

“He has told all the agencies he wants materials which will push the boundaries of the public’s tastes,” the insider said of Andreae’s strategy. Some have noted that the tone of these shows takes Fox back to its gimmicky unscripted early days under Darnell when the network aired shows like “Joe Millionaire” and “Temptation Island.”

Andreae was considered a “get” for Fox Entertainment Chairman Kevin Reilly.  At Discovery, Andreae developed highly watched series “Naked and Afraid,” “Fast N’ Loud” and “Curiosity,” which featured stars including Maggie Gyllenhaal and Robin Williams. Previously as the president of The Incubator, he produced shows for Spike, USA, Vh1, Discovery, History, Channel 4, TLC and Science.

Andreae was announced as Darnell’s replacement last October. Darnell left Fox last May as “Idol” was undergoing a massive makeover and Simon Cowell‘s “X Factor” wasn’t living up to the expectation that it would be “Idol’s” heir apparent.

L.A. Ross contributed to this report.