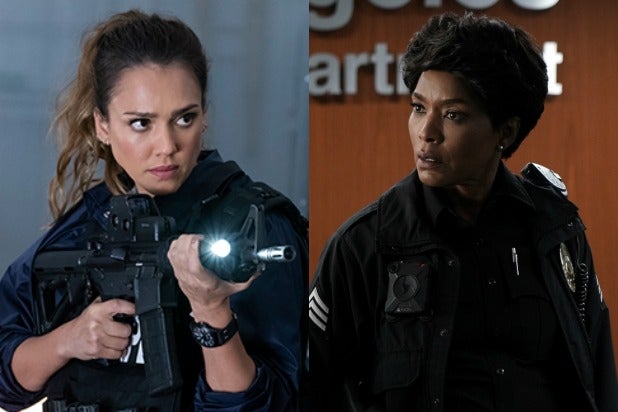 Fox may not be giving its usual upfront presentation to advertisers this year, but the network still set its fall slate right on schedule. On Monday — the day it would have held its upfront, if not for the coronavirus — the network unveiled a fall 2020 schedule which includes a pair of new dramas starring John Slattery and Kim Cattrall and returning hits like “The Masked Singer.”

But what that slate is missing is “9-1-1” and other staple series that are either moving to midseason or still awaiting decision amid the pandemic.

The network is filling the holes left by those shows with Slattery’s “neXt” and Cattrall’s “Filthy Rich” (dramas that wrapped production before the shutdowns) as well as broadcasts of “Cosmos: Possible Worlds,” which first premiered on Nat Geo, and Season 1 of Spectrum’s “Bad Boys” spinoff series “L.A.’s Finest,” starring Jessica Alba and Gabrielle Union.

Along with “The Masked Singer,” Fox’s returning fall programs include animated series “The Simpsons,” “Bless the Harts,” “Bob’s Burgers” and “Family Guy,” and the cooking competition show “MasterChef Junior.”

At midseason, Fox will bring back “9-1-1” for Season 4 and “9-1-1: Lone Star” for Season 2, along with new installments of “Duncanville” and “Hell’s Kitchen.” New shows debuting later this year include Mayim Bialik comedy “Call Me Kat,” which was just ordered to series at the network, and adult cartoons “The Great North” and “Housebroken.”

Scripted shows still waiting to be renewed or canceled by Fox — and therefore not mentioned in the network’s fall or midseason plans — include “Last Man Standing,” “Prodigal Son,” “The Resident” and “Outmatched.”

The first season of Slattery’s “neXt” and the network’s debut of “L.A.’s Finest” (which is produced by Sony Pictures Television and premiered on Spectrum Originals last spring) will take over Monday, a night that previously belonged to “9-1-1” and “Prodigal Son.” “9-1-1” and its spinoff “9-1-1: Lone Star” (which aired during its time slot this spring) will return at midseason. Though “Prodigal Son” has not yet been renewed by the network, an individual with knowledge tells TheWrap that deal should be closing soon.

Also Read: On the Bubble 2020: Which Broadcast TV Shows Will Be Canceled and Which Will Be Renewed?

Last fall, Tuesdays were occupied by “The Resident” and “Empire.” But with the medical drama still awaiting decision and “Empire” having come to a (premature) end, the night will begin with “Cosmos: Possible Worlds” at 8 and end with Cattrall’s “Filthy Rich” at 9.

Fox is keeping its ratings star “The Masked Singer” in the 8 o’clock hour on Wednesdays for its upcoming fourth season. Production on the new episodes is set for this August, with safety concerns currently being assessed ahead of taping. A new season of “MasterChef Junior” will be the “Masked Singer” lead-out this season, replacing the now-canceled drama “Almost Family.”

Thursday is still all about football (though the NFL’s schedule is still subject to change due to COVID-19), Friday still belongs to “WWE’s Friday Night SmackDown” (which resumed taping last month), and Saturday night is still devoted to sports.

“The effects of this global health crisis leave no business unaffected. As a media company that prides itself on an entrepreneurial spirit and the focus that comes with doing fewer things better, we mobilized, swiftly creating an entirely new, original-programming lineup for the fall to share with our partners this upfront,” Charlie Collier, Fox Entertainment CEO, said in a statement prepared to accompany the schedule. “In remote meetings with advertising and marketing partners over recent weeks, we sought to listen first and understand each partner’s unique concerns. Our primary goal is to help them back to business, so in turn, the message we’ve shared is one of relative stability on Fox, combining the best of primetime sports and entertainment with which to help our partners and their customers back to market.”

“Now, more than ever, consistency, results and stability take on an all new emphasis,” Marianne Gambelli, president of Fox ad sales president, added. “Fox is primed and ready for the fall with a great deal of stability across our entire programming lineup, featuring premium content that continually resonates with viewers, and the necessary scale that builds demand and produces results. During these uncertain times, we remain focused on the individual business needs of our partners and will continue to work with them to develop custom solutions with our unmatched offerings of assets to help drive their businesses forward.”

Fox’s fall 2020 schedule is below, with new programs in ALL CAPS.

And here are the official descriptions for Fox’s new series, with each in the network’s own words:

NEXT
From creator and executive producer Manny Coto (“24: Legacy”), executive producer Charlie Gogolak (“This Is Us”) and executive producers and directors John Requa and Glenn Ficarra (“This Is Us”), NEXT is a propulsive, fact-based thriller about the emergence of a deadly, rogue artificial intelligence that combines pulse-pounding action with a layered examination of how technology is invading our lives. The event series stars Emmy Award nominee John Slattery (“Mad Men”) as a Silicon Valley pioneer, who discovers that one of his own creations – a powerful A.I. – might spell global catastrophe. He teams up with a cybercrime agent (Fernanda Andrade, “The First”) to fight a villain unlike anything we’ve ever seen – one whose greatest weapon against us is ourselves. The series also stars Michael Mosley (“Ozark”), Jason Butler Harner (“Ozark”), Eve Harlow (“Agents of S.H.I.E.L.D.”), Aaron Moten (“Mozart in the Jungle”), Gerardo Celasco (“How to Get Away with Murder”), Elizabeth Cappuccino (“Jessica Jones”) and Evan Whitten (THE RESIDENT).

FILTHY RICH
FILTHY RICH is a southern Gothic family soap in which wealth, power and religion collide – with outrageously soapy results. When the patriarch (Emmy Award winner Gerald McRaney, “This Is Us,” “24: Legacy”) of a mega-rich Southern family, famed for creating a wildly successful Christian television network, dies in a plane crash, his wife (five-time Emmy Award nominee and Screen Actors Guild and Golden Globe winner Kim Cattrall, “Sex and the City”) and family are stunned to learn that he fathered three illegitimate children, all of whom are written into his will, threatening their family name and fortune. With monumental twists and turns, FILTHY RICH presents a world in which everyone has an ulterior motive – and no one is going down without a fight. From writer/director Tate Taylor (“Ma,” “The Help,” “The Girl on the Train”), the series also stars Melia Kreiling (“Tyrant”), Aubrey Dollar (“Battle Creek”), Corey Cott (“The Good Fight”), Benjamin Levy Aguilar (“Straight Outta Compton”), Mark L. Young (“We’re The Millers”) and Olivia Macklin (“LA to Vegas”), with Emmy Award nominee Steve Harris (“The Practice”) and Aaron Lazar (“Quantico,” “The Strain”). Kim Cattrall also serves as a producer on the series.