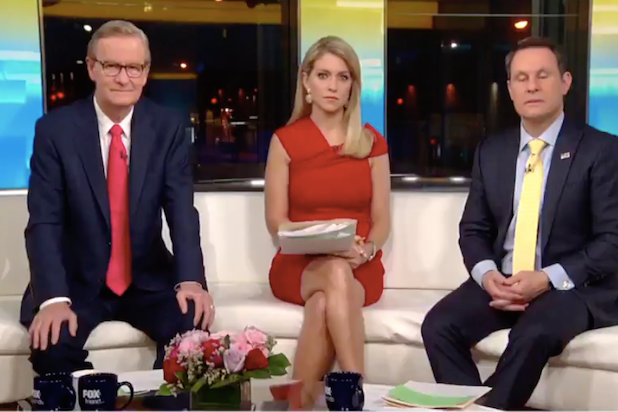 “This is not standard practice whatsoever and the matter is being addressed internally with those involved,” a Fox News spokesperson told TheWrap on Tuesday, who did not respond to questions about whether any disciplinary measures would be taken.

According to emails obtained by the Sierra Club via a Freedom of Information Act request and shared with TheWrap, Fox News producers and EPA staffers showed remarkable levels of pre-show cooperation between media and government officials that fall well outside journalistic practices.

“Would this be okay as the setup to his segment?” Fox producer Diana Aloi asked EPA press secretary Amy Graham before a May 2017 appearance by Pruitt, according to one email. Graham had already sent Aloi several talking points Pruitt wanted to cover during his “Fox & Friends” hit.

“There’s a new direction at the Environmental Protection Agency under President Trump–and it includes a back-to-basics approach,” Aloi wrote. “This after the Obama administration left behind a huge mess more than 1,300 super-fund sites which are heavily contaminated–still require clean-ups. So why was President Obama touted as an environmental savior if all these problems still exist?”

According to the emails, Pruitt’s team routinely reviewed talking points with Fox News producers beforehand — talking points that networks hosts rarely deviated from. Coal mining and a claim President Trump’s border wall would endanger jaguars were two other topics green lit by Pruitt’s team and discussed on the show.

Pruitt worked hard to cultivate his warm relationship with Fox, according to The Daily Beast, the first outlet to report this story. “In the early months of the administration, Pruitt’s staff reached out to numerous Fox News hosts and reporters to set up off-the-record lunches and dinners,” according to The Daily Beast. “When Pruitt had to cancel a ‘Fox & Friends’ interview last-minute, his team solicited the hosts’ addresses to send them personal apologies for canceling.”

The relationship between Pruitt and “Fox & Friends” — believed to be one of President Trump’s favorite shows — was so cozy that the ex-EPA head seemed to be blindsided when host Ed Henry pressed him on accusations of impropriety that eventually led to his resignation last July.

Henry grilled Pruitt on a myriad of topics, including a Capitol Hill condo he rented for $50-per-night from a fossil fuel lobbyist, hefty EPA raises and the hiring of EPA Superfund manager Albert Kelly despite his ban from the banking industry.