When Fox News’ Dana Perino interviews someone about their latest book, she always tries to read the whole thing first so she knows what to ask the author about. She did the same thing when preparing to interview her old boss about his book, though her old boss also happens to be the former president of the United States, George W. Bush.

“It’s a different feeling — a different preparation for sure,” Bush’s former White House press secretary told TheWrap by phone ahead of Sunday’s 10 p.m. ET premiere of her hourlong special with Bush. “I mean, I used to prepare him to answer questions from the press and now I’m asking questions.”

Still, Perino said she got to work reading his latest book, “Out of Many, One: Portraits of America’s Immigrants,” like she would for any subject. The collection featured 43 portraits of immigrants painted by Bush and blurbs about who they are and how they represent the American dream in their own way. 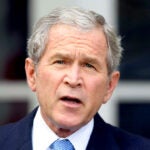 Also Read:
George W Bush Reveals Who He Voted for in 2020 – and It Wasn’t Trump or Biden

The longtime Fox News anchor is known for her reading habit. She hosts “Book Club” on streaming service Fox Nation and recently told the Deseret News she maintained “a measure of power” by being the most well-read person in the White House briefing room during her tenure. Reading Bush’s new book took four-and-a-half hours, she said, and when she was done, she knew what she wanted to ask about.

“I was actually very curious about why he wanted to write this book and do the portraits and what he was trying to say,” she said. “I just thought it was so interesting to talk to the former commander-in-chief who is now a civilian — a former president with some influence, no doubt — but also a proud American and an artist.”

Perino didn’t only want to cover the art, however. In a preview clip of her special released by Fox News, she asks about immigration policy and the situation at the southern border. Bush is doing a number of interviews to promote the book — and has spoken to CBS News, NBC News and People — so Perino, who filmed her conversation with him in mid-March, knew she’d need to do something to set Sunday’s special apart.

“I think one thing that’s different that I haven’t really seen is that I talked to four of the immigrants that he painted,” Perino revealed, saying she got the chance to ask them what it was like to be painted by a former president, as well as what their immigrant experiences have been like. Mark Haidar, she said, recounted how he learned to speak English by watching “Seinfeld,” but couldn’t share his favorite episode because it was a little inappropriate.

While not everyone gets to interview their boss — let alone a former president — some American experiences really are universal.