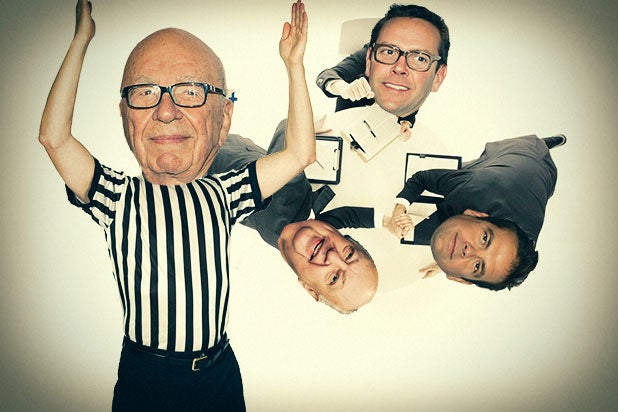 Aside from never-ending criticism that it’s a partisan mouthpiece posing as a news channel, Fox News hasn’t had to dodge a serious bullet in its 19 years on the air.

Which is why most media observers were shocked by recent news that chairman Roger Ailes, credited with Fox’s stability atop the cable news ratings, will report to Rupert Murdoch’s sons James and Lachlan when they officially take the helm on July 1 as CEO and executive co-chairman, respectively.

The move threatens to rock a network that has made remarkably few changes in talent and programming in those two decades compared to its competitors.

But one high-up Fox insider told TheWrap that the 75-year-old lightning rod will have no part of any shift in organizational hierarchy.

“If the Murdoch kids try to flex their muscle, Roger will tell Rupert, ‘It’s me or them,'” the insider said. When asked about Ailes’ response to a 21st Century Fox spokesperson who publicly undermined the notion that he’ll continue reporting to Rupert, the Fox insider echoed Ailes’ known brashness.

“It doesn’t matter what PR flacks put out in terms of the reporting structure, Ailes won’t change a thing and will continue going to Rupert as he’s always done,” the insider said, noting that historically their interaction has been minimal.

Ailes’ reluctance to answer to the younger Murdochs, both reputedly less conservative than the former GOP consultant, has already been documented.

According to The New Yorker’s Gabriel Sherman — who wrote the definitive book on the Fox News president — Ailes wrote up the script for Fox Business Channel’s report on Rupert’s quasi-retirement.

“Roger Ailes will continue to run the news network, reporting directly to Rupert Murdoch,” Fox Business reported, followed the next day by a contradiction of that report by a 21st Century Fox spokesperson, who stated Ailes would report to the Murdoch offspring.

There’s another element to consider, though it’s not discussed much in the media. Fox News is built on stars like Bill O’Reilly, Sean Hannity and Megyn Kelly — all of whom are loyal to Ailes, the insider told TheWrap. Not so loyal that they’d walk out the door if Ailes revolted, but loyal enough to make it known that Ailes factored into their long-term plans with the network.

Evidently Ailes gives what he gets in loyalty. When scandal erupted around O’Reilly’s Falklands War reporting of the 1980s, Ailes vehemently defended his top star, invoking one of his most faithful bromides of an ongoing “liberal media conspiracy” to hit back at the initial Mother Jones report.

Megyn Kelly, arguably the leading candidate to succeed O’Reilly as the face of Fox, is known to love Ailes, maintaining fierce fealty to the man who took a chance on a little-known former attorney a decade ago.

And of course, there’s the bottom line: “Our relationship isn’t about love, it’s about arithmetic,” Ailes told author Zev Chafets about his relationship with Murdoch.

If graded, Ailes would get an A+ for arithmetic; last year, Fox News accounted for almost 20 percent of 21st Century Fox profits. Overall, the network has been the No. 1-rated cable news channel for 14 years with Ailes at the helm.

“Ailes will be allowed to do whatever he wants,” another Fox insider told TheWrap, pouring cold water on any notion that the Fox News head will lose power with the Murdoch heirs in charge. “I can’t imagine they would mess with that operation that has been a cash cow for years.”

Former Fox News president Joe Peyronnin, who worked for Ailes when Fox News launched, said that it’s Ailes, not the Murdochs, who hold the leverage.

“Roger Ailes is Fox News, and under his leadership it has been an incredibly profitable ratings success,” Peyronnin said. “He has all the leverage, and it would be in the company’s best interest to extend his contract.”

That contract is set to expire in the winter of 2016, capping a pivotal stretch for Fox News which includes the election that will decide Barack Obama’s successor and, ultimately, the network’s direction for the next five to 10 years.

The more important storyline for Fox News can only be decided by Rupert Murdoch.

Does the Australian media mogul care more about his crown jewel’s prognosis for the next decade, or about ensuring that his media dynasty continues to thrive — through his children — for decades more?