Fox News has put up a billboard right in the heart of Hollywood to promote Greg Gutfeld’s upcoming show “Gutfeld!” as part of its advertising push for the network’s first-ever hour-long late-night program.

The billboard went up on Tuesday on Hollywood Boulevard and is located right near the El Capitan Theatre, where Jimmy Kimmel shoots his late-night program. It shows Gutfeld pointing (presumably at Kimmel) with the tagline “Cancel Culture Just Got Cancelled!” The advert will remain up until April 25.

In addition, the network bought local ads around the country during NBC’s “The Tonight Show with Jimmy Fallon” and “Late Night with Seth Meyers,” ABC’s “Jimmy Kimmel Live!” and CBS’ “The Late Show with Stephen Colbert” and “The Late Late Show with James Cordon.” The network did the same on Comedy Central and TBS’ “Conan” and “Full Frontal with Samantha Bee.” 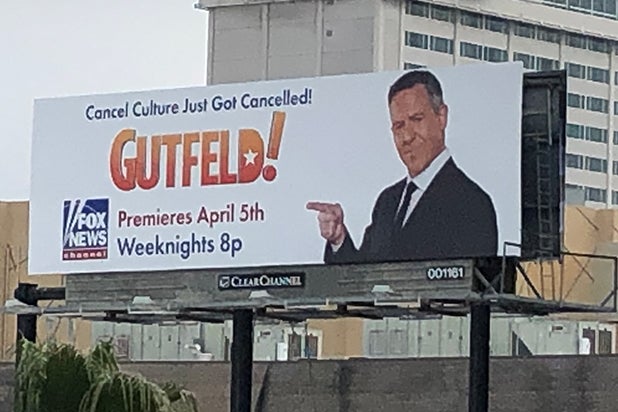 Last month, Fox News announced it was moving Gutfeld’s weekend show to weeknights at 11 p.m. ET, pushing Shannon Bream’s “Fox News @ Night” back to midnight. Gutfeld said of the move, “This feels like the perfect next step following the amazing success of the weekend show, which is due in large part to a great staff and a management that lets the show follow its own unique path.”

Fox News Media CEO Suzanne Scot added, “People need a reason to laugh. Greg’s unique and irreverent talk show has been an incredible success, often beating the late-night broadcast competition, despite its Saturday time slot. With one of the most loyal and engaged audiences in cable news, we’re thrilled to bring the show to weekday primetime and further solidify Greg’s place among late-night television stars.”

Gutfeld joined Fox News in 2007. He also serves as one of the co-hosts of “The Five.”