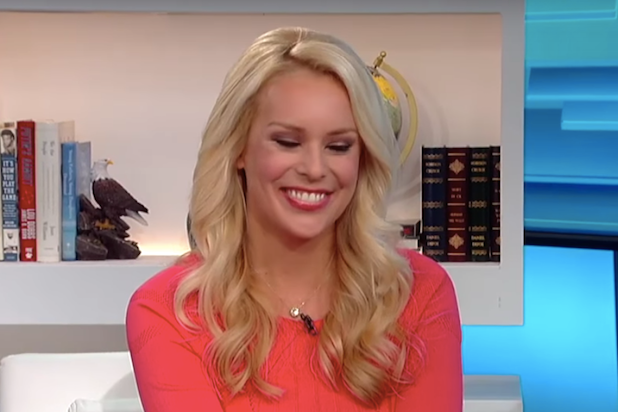 McHenry is currently the host of “Like It Or Not” on Washington D.C.’s local WTTG Fox 5 and also serves as a contributor to The Federalist.

But she is also known for a viral video in which she was seen berating a towing company employee, and for saying that she was demoted from a previous job at ESPN because she was white and too-well paid.

The video was recorded when she worked as an ESPN reporter in 2015. In the video, she insulted the tow-truck company employee’s education and teeth, then told her to lose weight. The sports network suspended her for a week.

In May, she drew attention again for tweeting and then deleting that she was demoted from her ESPN gig “because I was white & I made too much.”

It remains unclear what McHenry will do at her new job. A person familiar with the matter, however, told TheWrap that she will have her own show and make regular appearances on Fox Radio. A Fox News spokesperson denied that she would be doing either.

McHenry did not immediately respond to request for comment from TheWrap.

Work on Fox Nation has continued quietly since the network announced plans for the 24-hour subscription only service in February. A website for the new service, is empty save for a box requesting user emails and a large image of Tomi Lahren, who is so far the face of the venture.

“Designed to enhance the FOX News viewer experience, Fox Nation will take a deep dive into the big issues of the day with live exclusive daily streaming content and long-form programming available only to subscribers,” said a press release in February describing the mission.

“Fox Nation will also include access to exclusive events and 20 plus years of archival FNC programming not available anywhere else. Interaction with all of FNC’s popular opinion hosts and personalities will also be a mainstay of the new platform.”

Fox Nation will launch in the fourth quarter of 2018 and will require no cable service to access. The content will be original and occasionally feature cameos from Fox News stars like Sean Hannity. The Fox News pivot to digital is an attempt to lock in younger audiences.