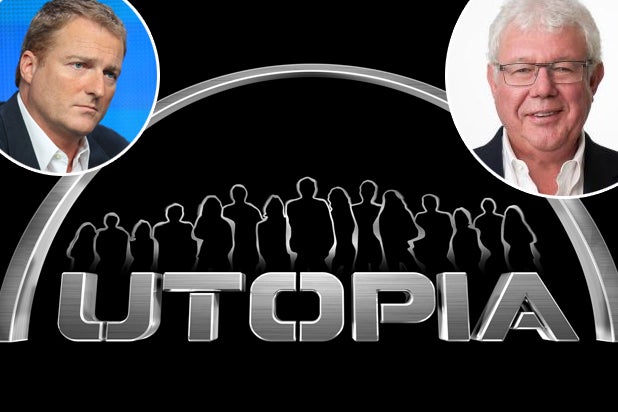 This discord has placed a cloud over “Utopia,” the first big greenlight from Simon Andreae, the executive vice president of alternative entertainment who was brought in to replace unscripted chief Mike Darnell last fall.

Andreae preemptively took “Utopia” — with its provocative premise of “pressing reboot” on the world, as executives refer to it internally — off the market in January ahead of a possible bidding war. Adapted from a Dutch model from “Big Brother” and “The Voice” producer John de Mol, Fox’s “Utopia” will move a group of everyday people to an isolated, undeveloped location for an entire year, challenging them to create their own civilization.

Fox intends to shoot the contenders around the clock in this ambitious production, live-streaming it online as well as possibly airing multiple episodes during the week. The hope, insiders say, is that “Utopia” may be the ratings juggernaut Fox has been looking for to replace the failed “X Factor” and the waning “American Idol.”

“Utopia” won’t come cheap, however. Executives working on the show have told TheWrap that the costs could amount to as much as $50 million for 20 episodes. That price tag doesn’t include the costs of the technology for its online components.

“The bill has arrived and it is on the very high end of staggering,” one executive who declined to be identified said.

Another network executive pointed out that the budget includes the initial set build and will be much lower if the show is a success and continues into three seasons per year, which is the model Fox is considering.

Nevertheless, the high numbers have caused other executives to voice their concern. News Corp.’s live sporting event czar David Hill, who was brought in to shore up “American Idol” and “The X Factor” after Darnell’s exit last year, has been particularly vocal.

There has been a lot of friction between David Hill and Simon. The insider told TheWrap, “these two are at odds since Hill rightly pointed out to others in the company that ‘Utopia’ may be a giant expensive embarrassment in the making.”

Fox declined to comment for this story, but executives have told TheWrap that ambitious projects such as “Utopia” never come without some internal conflict, and that Hill and Andreae are working productively together.

“Utopia” debuted in the Netherlands in January on the SBS6 network. Ranking as the network’s highest-rated unscripted premiere in six years, “Utopia” continued its winning streak as the No. 1 series in its time period (Monday-Friday) for 10 consecutive nights. It’s easy to see why Andreae believed he had to take the show off the market at that time.

But, Hill pointed out that the Dutch series’ ratings didn’t hold up over the show’s run. And according to ratings numbers one Fox insider provided to TheWrap, that seems to be true.

The show’s viewership averaged 1.4 million viewers in its premiere week in January. By March, the viewership had fallen to an average 963,000 viewers. That’s a 31 percent decrease in viewership over the show’s run. Hill suggested that those numbers don’t bode well for Fox’s “Utopia,” which Andreae didn’t appreciate, according to a Fox executive.

It should be noted however that “Utopia” competed against the winter Olympics for several weeks during its first season in Holland and viewership for the run of the show improved upon SBS6’s average share in the timeslot.

An individual with knowledge of the situation also pointed out that many shows see a decrease in viewership over their runs.

Fox’s changes to “Utopia” have also caused friction between Andreae and producer de Mol, according to the network insider.

Fox is shooting the series on a closed outdoor set in Santa Clarita, Calif., whereas de Mol’s Dutch series actually shot in a cutout from an actual forest. Andreae made the location choice, because he wanted more control over who could come and go on-set (the original was open to outsiders) and he wanted to make sure that the weather would be good year round (Read: Sunny and bathing suit-friendly).

An upset de Mol is allegedly not allowing any more format changes. “Simon sends over ideas, and de Mol tells his team to ignore them and he hardly considers Andrae to be his creative equal,” the insider said.

Meanwhile, Fox is just weeks away from its Upfront presentation to advertisers in May. It will not present controversial new reality series “Boom,” which has also been plagued by internal strife over Andreae’s perceived downmarket taste, and the ad sales department has warned against presenting other upcoming reality series, worrying that advertisers will frown upon their risque concepts.

“Utopia,” with all its bells and whistles, is a show Fox can throw a flashy presentation around.

That means de Mol’s Talpa Productions has Fox in a bad position due to the tight schedule. And although Fox would like to get the budget for “Utopia” closer to $40 million than $50 million, the production company isn’t budging on its price with de Mol not entertaining further compromises on the format.

A representative for Talpa Productions denied reports of conflict to TheWrap. “There are no issues at all between Talpa and Fox,” the representative said. “We are both on the same page and working together as a team collaborating to make ‘Utopia’ the best show possible.”

Another possible problem for “Utopia” are comparisons to CBS’s “Big Brother,” which Talpa also produces.

An individual with knowledge of the situation told TheWrap that a CBS attorney has placed a call and sent a letter to de Mol’s attorney that expressed concern over media reports characterizing “Utopia” as a mixture of “Big Brother” and “Survivor,” formats which CBS has the sole rights to in the U.S.

The recent hiring of “Big Brother” producer Jon Kroll as one of “Utopia’s” showrunners has further increased fears that CBS will view the series as a “Big Brother” knockoff, according to one Fox insider.

“It could be said that inside Fox the atmosphere has been anything but utopian,” the insider said.