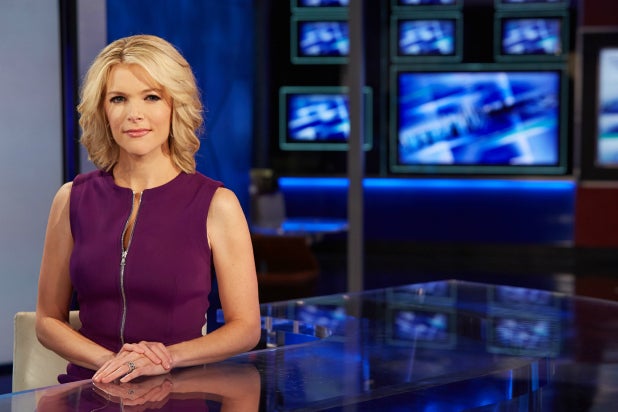 In a matter of hours, Megyn Kelly could score her biggest audience yet.

On Wednesday evening, the Fox News Channel anchor will sit down with Jim Bob and Michelle Duggar from TLC’s “19 Kids and Counting.” But “The Kelly File” host admitted to TheWrap this Oprah-style interview is a departure from her usual conversations with politicians like Dick Cheney, Jeb Bush and Chris Christie.

Although she promises it won’t be her last headline-making sit-down. “We are very much in contention for the biggest ‘gets’ right now,” Kelly said. “It’s a jump ball, but I think that ball is tipping over to me.”

The interview comes as the 44-year-old celebrates 20 months as the cable news ratings winner of the 9 p.m. timeslot in both total viewers and the main 25-54 news demo.

The sit-down with the Duggars was a highly sought-after one, as the family has granted only a print interview, to People, since eldest son Josh admitted to acting “inexcusably” in response to accusations that as young teenager he molested five minors, including several of his sisters.

Kelly said she landed the coveted conversation in a pretty straightforward manner: She approached the family and presented an argument for why “The Kelly File” was the best choice.

“When I spoke with the Duggar family, I said, ‘I am going to ask you the tough questions,'” said Kelly, who had no prior relationship with the massive clan. “‘You will not be getting a pass on the tough questions. But I will be fair, and you will be permitted to answer and offer context. And it will not be a ‘gotcha’ or an attempt to bring down the Duggars … That is not my role.”

Kelly touted a lack of external post-production editing as another plus that draws wary interview subjects: “I have final say on the ultimate broadcast — and no one but me.”

While Kelly believes the interview will not only be an opportunity for the Duggar parents to tell their side of the story, she thinks it could help relieve some of the pressure they now face. TLC has pulled “19 Kids” from its schedule but it has not canceled the show, which is the network’s biggest ratings draw, regularly pulling 3 million weekly viewers.

Kelly said she had no opinion on the show’s fate. “I don’t know what TLC will decide, because it’s a big money-maker for them and it’s only getting more popular,” she said. “This case is more complicated than at first it appears.”

While Kelly doesn’t know what to expect numbers-wise, network honcho Roger Ailes’ fastest-rising anchor knows exactly what she’s doing: “I’m just going to try to hit a single and not a home run.”

The Duggar interview is only the latest coup for Kelly. On May 11, she made headlines when presidential hopeful Jeb Bush told her he would still have invaded Iraq even “knowing what we know now.” (The former Florida governor’s camp later told Kelly she was “very fair.”) And last summer, she told former Vice President Dick Cheney on air that he “got it wrong” in Iraq.

Kelly has also had big moments recently with Governors Mike Huckabee and Chris Christie; she scored the latter mere days after taking on Jeb Bush. She will have a bigger platform in August when she co-moderates the first GOP debate, alongside Chris Wallace and Bret Baier. Fox News is sponsoring the event.

For Kelly, there’s an obvious difference in gravity when it comes to interviewing reality stars versus possible commanders-in-chief.

“You sit down with me, and you’re telling me and the nation that you want George Washington’s job? You better expect some very tough questions,” she said. “And if you can’t handle it, you shouldn’t be in the arena — move along.”

Kelly’s higher profile has also netted higher ratings for the Syracuse, N.Y. native. In May, Kelly’s FNC hour averaged 2.122 million total viewers, with 417,000 coming from the key adults 25-54 ratings demo. “The Kelly File” was second in both metrics across all of cable news, following only fellow Fox News anchor Bill O’ Reilly. In the main demo last month, Kelly was a mere 17,000 viewers behind her lead-in.

As a matter of fact, Kelly saw a whopping 58 percent year-over-year viewership increase in the main news demo, the biggest growth for first-place FNC.

By comparison, MSNBC’s “The Rachel Maddow Show” delivered its second-lowest rated month in total viewers in May and third-lowest-rated demo since the show’s September 2008 launch.

Those staggering numbers have been a big boost for Kelly’s bookers. “People want to be on this show, both because of the number of viewers and the platform, but also because I think they know by now that they’ll be treated fairly by me,” she said. “They won’t get a pass. Tough but fair is my approach — and hopefully smart.”