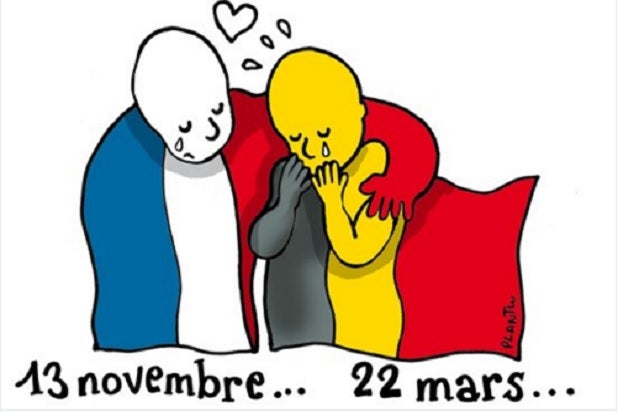 A drawing by French cartoonist Plantu showing solidarity with the people of Brussels has quickly gone viral in the wake of the deadly terrorist attacks that rocked the Belgian city on Tuesday.

Brussels was rocked Tuesday morning by a series of terrorism attacks, including two explosions at the airport and one at a subway station in the Belgian capital. Initial reports suggested that the death toll could be as high as 28.

The attacks come four days after the arrest of Salah Abdeslam, the main surviving suspect in the deadly terrorist attacks in Paris that killed 130 people and injured 368 others.

Belgian authorities were still seeking at least two of Abdeslam’s suspected accomplices, according to the New York Times. They included 24-year-old Najim Laachraoui and 31-year-old Mohamed Abrini, who was caught on a security camera with Abdeslam at a gas station near Paris two days before the Nov. 13 attacks.