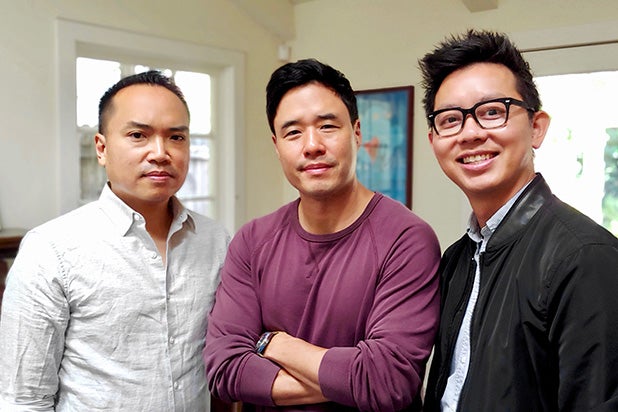 “Fresh Off the Boat” star Randall Park has set up his own production company and signed a first-look deal with 20th Century Fox Television, the actor announced on Wednesday.

Founded by Park with longtime creative partners Michael Golamco and Hieu Ho, Imminent Collision is “dedicated to developing comedy-forward stories from Asian American perspectives for all audiences,” according to the announcement.

Park, Golamco and Ho first met UCLA in the Asian American theater company that Park co-founded, Lapu The Coyote That Cares, where they developed a play titled “Imminent Collision,” which now lends its name to their new company.

“Our immigrant parents came to America with a dream. That dream was for their children to land a first look television producing deal, scripted and unscripted, at a major Hollywood studio,” the trio said in a joint statement. “We would like to thank Carolyn, Howard, Dana, Craig and the entire 20th team for helping us make our parents proud.”

Park currently stars on ABC’s “Fresh Off the Boat,” which is produced by 20th. He also recently co-wrote and starred in Netflix’s “Always Be My Maybe” with Golamco and another UCLA alum, Ali Wong. He is next set to reprise his “Ant-Man and the Wasp” role on the Marvel series “WandaVision” for Disney+.

Golamco is a writer, next set to adapt the novel “Hello, Universe.” His previous credits include Taika Waititi’s now-shelved “Akira” adaptation for Warner Bros. and SyFy’s “Nightflyers.” Ho is an alum of BuzzFeed and Jon M. Chu’s Chu Studios.

“We’ve had the pleasure for years of watching Randall as an anchor of our beloved series, ‘Fresh Off The Boat,'” Carolyn Cassidy, 20th Century Fox Television’s president of creative affairs, said. “He is as hilarious as he is kind and talented. He introduced us to his longtime friends and collaborators Michael and Hieu. They blew us away with their taste and passion for creating television shows from their own unique perspective as Asian-American creators, and we knew immediately that we had to be in business with them. They’re smart, driven and brimming with ideas. They share our desire to bring voices to the screen that are underrepresented and in doing so, create series that reflect the drama and humor of the world we live in today.”