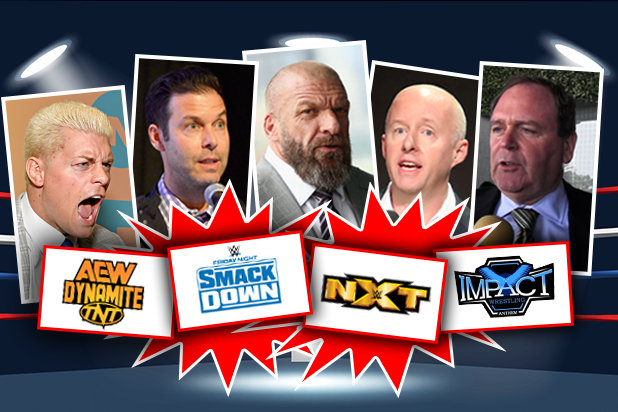 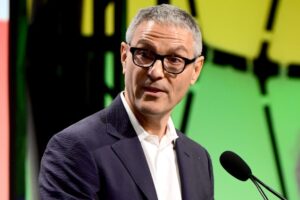 The bell is about to ring on one of the biggest weeks in professional wrestling’s long TV tenure — with the introduction of new shows, new leagues and new networks that are spreading shows across four weeknights.

It technically started with WWE’s “Raw” season premiere on Monday, which gives way to Impact Wrestling’s unofficial start as a Tuesday night show on AXS TV — it airs a placeholder special on Tuesday. On Wednesday evening, following a “Countdown” special airing Tuesday — TNT’s long-awaited All Elite Wrestling (AEW) series, “Dynamite,” finally debuts. That one will immediately face stiff competition in the form of WWE’s “NXT” property, which will launch its second hour on key competitor USA tomorrow. (Former WWE Network series “NXT” planted its flag at 8/7c two weeks earlier on cable, but needed to wait for “Suits” to end its run at 9 o’clock.)

Fans can finally take a bit of breather on Thursday, but will want to get their popcorn ready for Friday, when “SmackDown” premieres on Fox at 8/7. That debut comes complete with a blue carpet pre-show at 7:30 p.m., a Kofi Kingston vs. Brock Lesnar WWE Championship match, and a few lead-up specials of its own. (To that final point, one could argue the “premiere week” craziness actually began before Monday — see here.)

In other words: Ding, ding, ding.

In its initial preview (of sorts), “NXT” drew 1.2 million total viewers, with 553,000 of them ages 18-49. (Week 2 received one million total viewers, 409,000 from the key ratings demographic. All interviews in this story were completed before that Nielsen data became available.) Those aren’t “Raw” or “SmackDown” numbers, but the industry was impressed — including the competition.

“They did really well and I’m not surprised at all,” TNT, TBS and truTV General Manager Brett Weitz told TheWrap.

“The way I look at anything like the WWE…is it’s either quarter-by-quarter, sometimes year-over-year,” McCumber, who loves what he calls NXT’s “‘Fight Club’-type atmosphere,” told us. “If you’re too concentrated on trends week-over-week, you’re gonna drive yourself nuts.”

Triple H, the founder and senior producer of the NXT brand, was “thrilled” with the Nielsen returns, he told TheWrap — especially with what the WWE executive vice president of talent, live events and creative called a “very short window” to promote the premiere.

“I was very happy…for us to do over a million viewers,” the wrestler-turned-executive (and still occasional wrestler) said, adding that he was particularly “excited” with tune-in among 18-34 year olds.

The “NXT”-to-USA move was in the works for a “year and a half,” Triple H (real name Paul Levesque) told us. So the deal-making was a marathon, not a sprint — exactly the same metaphor both he and McCumber say they will use to evaluate “NXT’s” success or failure on cable television.

On Wednesday, “NXT” gets some stiff competition in the form of “All Elite Wrestling: Dynamite.” With both airing weekly from 8/7c to 10/9c, the pro-wrestling audience — and Nielsen panel — will be split down loyalty lines.

But which of the young-gunning promotions will win what fans and wrestling journalists have already dubbed the “Wednesday Night Wars,” a callback to the 1990s “Monday Night Wars” between WWE’s (then WWF) “Monday Night Raw” and competitor WCW’s “WCW Monday Nitro”?

Weitz has an interesting thought on how the very first battle might play out.

“I think what you’re gonna see in the quarter-hours is like a bifurcated number. You’re gonna like see a split, almost,” Weitz said, referring to Nielsen’s 15-minutes-at-a-time reporting. “It’s gonna be very interesting. It would be fun to do minute-to-minute. But if you look at the quarter-hours, what you will see is probably people toggling back and forth.”

“I assume what people will do is, they will have a device with NXT and a device or TV with AEW,” Weitz continued. “And they will just want to watch them side-by-side. And people will be on the Twittersphere, talking about which experience is better and what’s happening here and there, and everyone will be a critic.”

Weitz acknowledged that a true “War,” like the old days, breaking out “would be amazing for us.”

Cody Rhodes, one of AEW’s founders, executives and star wrestlers, is ready to scrap both in and outside of the ring. The WWE alum (whose late father, the legendary “American Dream” Dusty Rhodes is up there with Levesque in terms of an individual’s mark on the NXT brand), believes his new league could win that war — but that’s not the young general’s priority. Plus, these days, a “W” looks different.

“I think we judge the TV shows in all of media on a different metric today,” Rhodes told TheWrap. “And I don’t think it’s a matter, right now, of winning or losing.”

Ed Nordholm, the chief corporate officer of Anthem Sports & Entertainment, which now owns Impact Wrestling and its new home AXS TV, believes that much like the “NXT” debut, we’ll see big numbers out of next week’s “All Elite Wrestling: Dynamite” start. Nordholm, who is the president of Impact Wrestling, also came across pretty confident about the official “Impact!” start on AXS later this month.

“The timing couldn’t be better,” Nordholm, said of Impact’s move into the old “SmackDown Live” time slot. An upgrade from the more narrowly distributed Pursuit Channel should also help.

But next month’s performances are no guarantee of long-term future success, he cautioned — for Impact, for AEW, or for any of these brands.

“There’s so much happening in October, that I don’t believe these numbers…will ever be representative of the sustaining numbers for people. There’s a novelty factor,” Nordholm, who called pro-wrestling “the hottest thing on primetime TV this fall,” said. “I’m sure the numbers will be big.”

Levesque knows a thing or two about pro-wrestling “wars” playing out on the traditional battlefield of the Nielsen ratings sheets. A refresher of how loosely and literally that term was thrown around back in the heyday of WWF vs. WCW:

The former Degeneration-X leader says he’s not thinking of NXT vs. AEW in the same light.

“Will we get there? I don’t know, because I don’t know what [‘Dynamite’] is,” Levesque told us. “Right now it doesn’t do me any good to speculate over something that isn’t even there [yet].”

“And this is not a knock and whatever you say now it’s like, ‘Oh my God! Shots fired.’ Trust me, when I want to take a shot, I’ll take a shot. I’ve not fired anything,” Levesque continued. “So far they’ve put on what four shows, five shows? And they’re just singularly booked events, This Person vs. That Person, great and good. And fans enjoy them and that’s great. That’s a world away from two hours live every week on TV. Can they do it? Time will tell, but I’m not gonna waste a lot of my intellectual equity, to use a big term, on worrying about that. When the time comes that it is what it is and successful or whatever, great. In the meantime, I hope they have a good product, I hope they do well for the fans and that the winners are the fans, ’cause they get to choose and see what they want to watch.”

Levesque doesn’t have to make a ratings prediction for the “NXT” premiere, because for all intents and purposes, that already happened. We asked if he has an estimate for “Friday Night SmackDown” on Fox, where the husband to WWE Chief Brand Officer Stephanie McMahon and son-in-law to WWE Chairman and CEO Vince McMahon sees a real “growth” opportunity.

“Going to broadcast television opens up a lot more eyeballs,” he told us, with a recent anecdote to back that up. On Sunday, when Levesque was at Fox’s Emmy Awards, his phone was blowing up with people texting him “Just saw the [‘SmackDown’ on Fox] commercial!”

“It’s more exposed,” he said of the broadcaster’s heavy cross-promotion. “That’s not fishing in our own pond, that’s outside of our natural environment, getting people like lapsed fans or maybe people that haven’t sampled before to come and try it.”

All of that for Levesque to say “I don’t know” on “Friday Night SmackDown” ratings, pointing to the blue brand’s new night and delivery system in a television landscape that has seemingly evolved faster than WWE’s women’s locker room. But the “chatter is good,” he told us.

And why wouldn’t it be? WWE has basically been the Coke or Kleenex of sports entertainment. As such, “SmackDown” has the market share, a 20-year legacy, a huge budget and now, the reach of a free, over-the-air broadcast network. The “B” show to “Raw” even has an unlikely ally in McCumber, the man who wished “SmackDown” well as it left his cable airwaves.

“We want ‘SmackDown’ to be successful,” McCumber said, filing his support under “good business” practices. “That’s a good thing because that just gets more people into the WWE Universe. And when you think about it this way, if you’ve got ‘Raw’ on Mondays, ‘NXT’ on Wednesdays, ‘SmackDown’ on Fridays and then, clearly, the WWE with their big social platforms and their abilities to get behind these shows and then to cross-promote, I think that’s a great paradigm for success.”

“Look at a brand like the NFL,” McCumber, who also runs Syfy, continued. “If I’m watching NFL on CBS or Fox, they cross-promote to the other networks, the other shows. If you look on the NFL Network, they’re cross-promoting to NBC. So it’s all within that universe and I think we would be silly not to be able to promote each other’s shows because I really do believe the rising tide is gonna lift these boats even further.”

Though his substantial boat — let’s be serious, it’s a yacht in the McMahon Family’s case — may be on the rise, Levesque is wading his toes into newer and potentially even deeper waters. Back in his smaller pond, Nordholm referred to all of this as “the glory time for wrestling.”

Cody is taking it a step further. On Twitter last week, the 34-year-old second-generation wrestler penned a long letter to fans. The opening sentence called Oct. 2 “the most significant night in wrestling in my lifetime.”

We asked Rhodes, the younger brother of Dustin Rhodes, who wrestled for decades as WWE’s Goldust (Cody went by “Stardust” in WWE, where both were heavily face-painted), if he meant that just for him personally, or for the industry as a whole.

“Well, I mean wrestling is always kind of case-by-case when you have such a wide variety of characters that you could love or hate,” Rhodes told us. “But I really do think with everything that’s happened, with this Wednesday night becoming kind of destination television, I think this has trumped anything else in wrestling currently.”

“I’m not saying it’s forever gonna hold that distinction, but I don’t think there is anything more important in wrestling than Wednesday, Oct. 2,” he continued. “And if you need to justify that statement, it really comes down to when you start talking about all the factors going into this. I mean, wrestling returning to TNT after 18, almost 20 years, another billionaire [AEW bankroller Tony Khan, the son of Jacksonville Jaguars owner Shahid Khan] being involved in the industry, this one an avid consumer, the schedules, the lifestyles, the pay — everything that’s been heavily analyzed in the build to this, it all will be seen in color on TV, Oct. 2. So maybe it’s me, but I feel like it is for all of wrestling.”

The two-hour “Friday Night SmackDown” premieres Friday at 8/7c on Fox’s broadcast channel. A half-hour red-carpet special will serve as its lead-in. 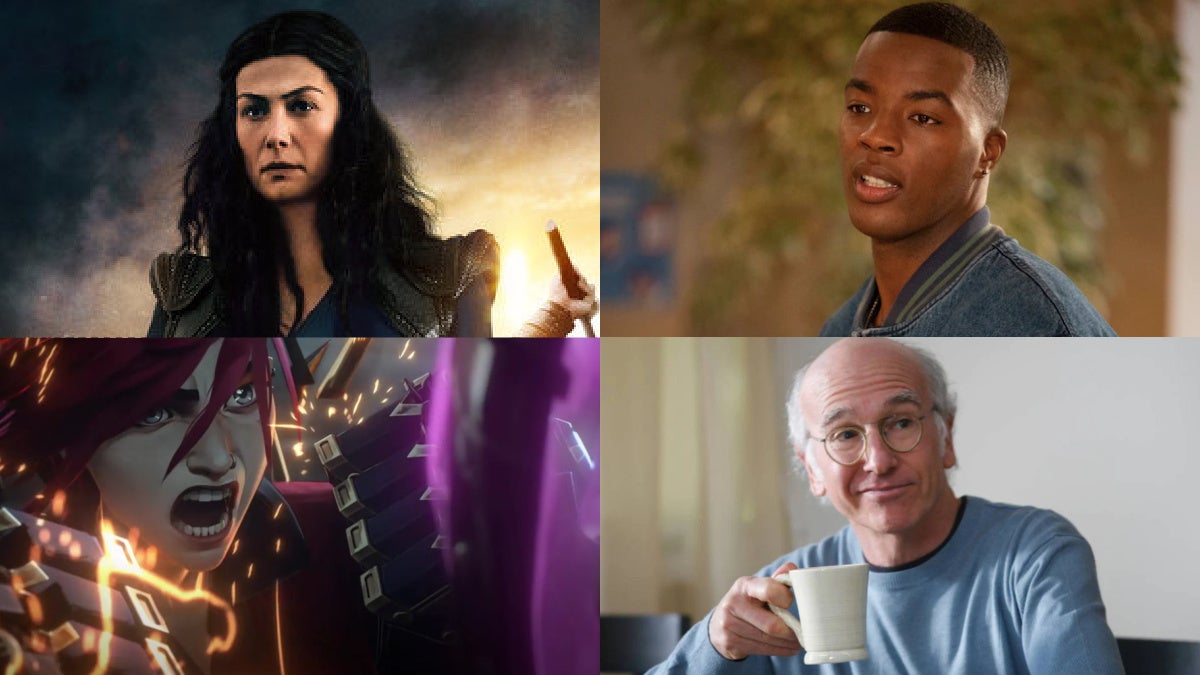 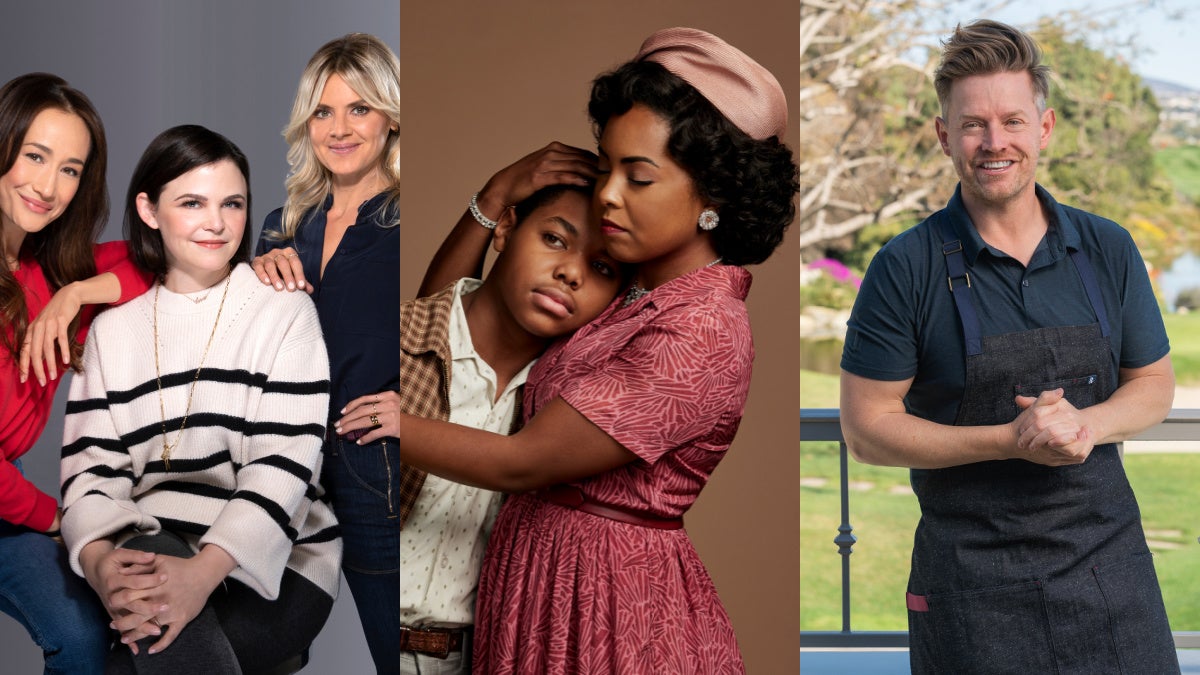