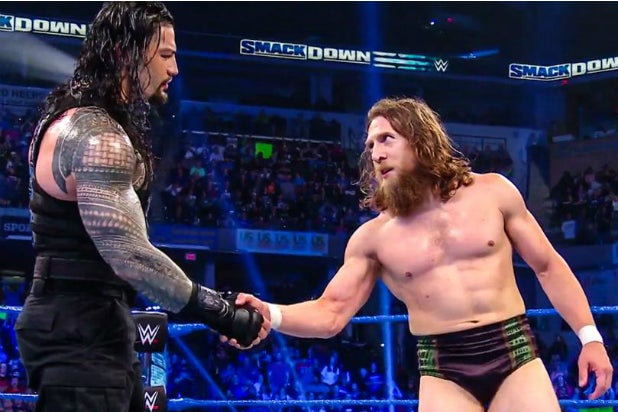 Fox’s “Friday Night SmackDown” got humbled a little bit last night, when the WWE pro-wrestling series attracted the smallest TV audience (2.441 million total viewers) of any other show on the Big 4 broadcast networks, which refers to CBS, NBC, Fox and ABC.

That said, and despite a 30% week to week drop in the important adults 18-49 demographic, “SmackDown” was the highest-rated series of the night, which means Fox was still the No. 1 network on Friday. But it was close this time: Fox’s (and “SmackDown’s”) 0.7 rating in the key demo just squeaked by CBS’ 0.6, according to Nielsen’s Live + Same Day ratings.

In terms of total viewers, “SmackDown” declined 16% from the prior Friday. CBS attracted the most overall eyeballs again, this time reeling in a primetime average of 6.4 million viewers.

On an individual series basis, the second-smallest overall audience went to ABC sitcom “Fresh Off the Boat,” which had 2.474 million total viewers. To be fair to Fox, “SmackDown” had to maintain its 2.4 million viewer-average from 8 p.m. to 10 p.m., while “FOTB” only needed to keep the attention of its 2.5 million viewers from 8:30 to 9 p.m.

Fox’s “Friday Night SmackDown” premiered on Oct. 4 to a 1.4 demo rating and 3.888 million total viewers. Simple math tells us that by Week 3, the series has already halved its debut’s big “live” demo rating.

It was not unexpected that “SmackDown” would slip from Week 1 to Week 2 and then again from Week 2 to Week 3, but the steepness of the trajectory is not what WWE would like to see.

And unfortunately, delayed viewing doesn’t really help a live “sports” show like WWE’s fare. By the time Nielsen’s Live + 3 Day viewing results come out, expect Fox and “SmackDown” to no longer be the gold-medal winners, just like last time.