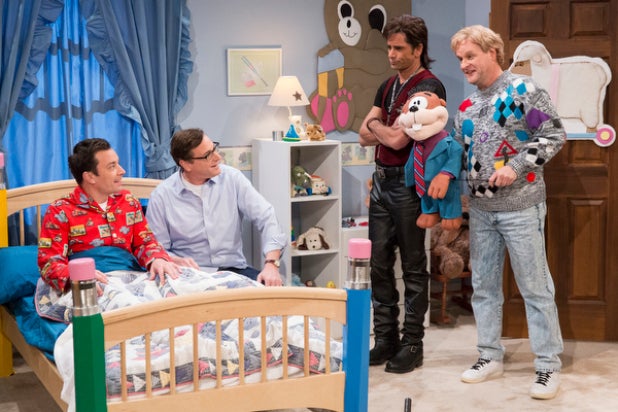 The trio, dressed in their best (read: worst) ’90s garb and wigs, visited Fallon in his bedroom — which bore a striking resemblance to Michelle Tanner’s (Mary Kate and Ashley Olsen) from the sitcom — to teach him a life lesson about leaving “Late Night.”

In the skit, Fallon has a hard time sleeping because he’s scared to leave “Late Night,” his home for the past five years.

Gladstone did Carson, Leno and, of course, Popeye impressions for the frightened youngster in his pencil-posted bed. He also dropped his trademark “Cut-it-out” and Mr. Woodchuck act. Katsopolis treated the crowd with a “Have Mercy,” a “The hair, hah,” and then the three middle-aged roommates sang Elvis’ “Teddy Bear” to Fallon. It was all sweet and surprisingly good.

The actors have played themselves in recent yogurt commercials, teasers and videos, where the three middle-aged men still live under the same roof. They will reprise the plot in a Super Bowl commercial this Sunday.

Fallon is leaving “Late Night” next month to take “The Tonight Show” over from Jay Leno on Feb. 17. One week later, Seth Meyers debuts in Fallon’s then-former “Late Night” chair.

Watch the clip below, and take a look at some more photos from the opening: