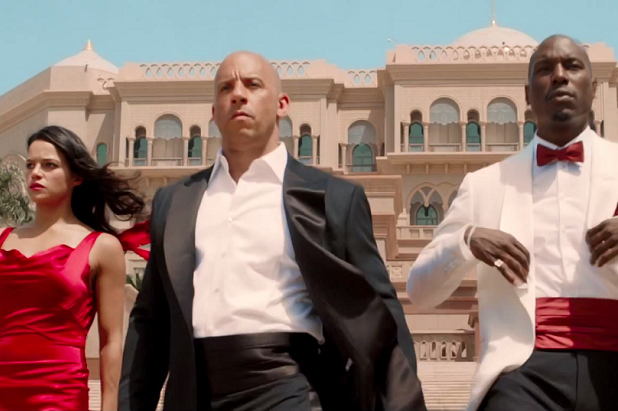 “Furious 7” hit on all cylinders this weekend as it took in $60.6 million — the highest second-weekend gross ever in April — and the high-octane sequel cruised to its second straight blowout victory at the North American box office.

The second- and third-place movies were distributed by Fox, but Universal’s “Furious 7” put them in the rear-view mirror quickly.

The runner-up was DreamWorks Animation’s “Home” with $19 million — “Furious 7” took in almost that much on Friday alone — which raised its domestic total to $130 million after three weekends. The Scott Eastwood-Britt Robertson romance “The Longest Ride” was the only wide-opening film, and it finished third with $13 million.

See photos: The Evolution of ‘Fast and the Furious’ Franchise (Photos)

Universal’s action sequel “Furious 7” is not only burnishing its blockbuster credentials and bearing down on $1 billion at the global box office, it’s doing it quickly. And the film’s foreign total far outpaced its domestic haul this weekend.

“Furious 7” powered into China and Russia with record box-office debuts and took in a staggering $198 million in its second weekend abroad. That upped its international total to $548 million and its global haul to $800 million after just 12 days in release. It also drove the “Fast and Furious” franchise over the $3 billion mark at the worldwide box office.

“Furious 7” is still in a market-high 4,022 theaters in North America, and still in high gear. Some “Fast and Furious” movies have been front-loaded in the past, but the second-week total for “Furious 7” was off a respectable 59 percent from last weekend’s record $147 million domestic debut, the year’s best and the highest ever in April. “Furious 7” passed the $250 million mark domestically in just nine days, the fastest ever for a Universal release.

IMAX theaters continued to play a big part in the success of the James Wan-directed “Furious 7,” which stars Vin Diesel, Dwayne Johnson, Michelle Rodriguez, Jason Statham and the late Paul Walker. This weekend they brought in $14 million, or a whopping 23 percent of the domestic grosses.

The hold by second-place “Home” was impressive. The animated alien invader tale voiced by Rihanna, Jennifer Lopez and Jim Parsons was off less than 30 percent from last weekend. With the $112 million its made overseas, it’s up to $242 million in worldwide grosses after three weeks.

The opening of “The Longest Ride” is the second soft debut in a row for a Nicholas Sparks adaptation, coming on the heels of his lowest ever, the $10 million that “Best of Me” opened to last October for Relativity.

The film played as expected demographically, with an audience that was 73 percent female and 54 percent under the age of 25. Moviegoers gave “Longest Ride” an “A” CinemaScore, better than the critics who have it at 29 percent positive on Rotten Tomatoes.

The Weinstein Company expanded “Woman in Gold” from 258 theaters to 1,504 theaters in its second week. The Helen Mirren-Ryan Reynolds drama set in the art world took in $1.8 million and is heading for $5.7 million over the three days, good for seventh place.

The R-rated comedy “Get Hard,” Disney’s “Cinderella” and “The Divergent Series: Insurgent” took the fourth through sixth spots.

Overall, the box office was roughly three percent down from the comparable weekend last year when “Captain America: The Winter Soldier” led the way with a $41 million second weekend. For the year, the domestic box office is almost 7 percent ahead of 2014 and on pace to top $11 billion and be the biggest in history.