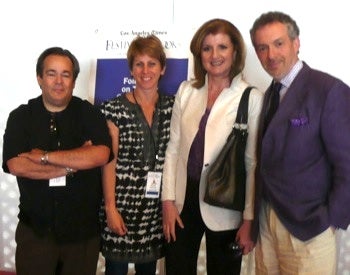 It was a packed auditorium and a lively debate at Broad Hall at UCLA today, where we addressed the future of media on our panel — myself, Arianna Huffington, Marc Cooper (pictured left, with festival's founder longtime chief architect Steve Wasserman) and Andrew Donohue. I'm starting to see a pattern emerge from these conversations, which are going on daily, constantly, all over the country. The pattern is, essentially, legacy media (read 'old media') getting defensive and weepy over their decline, new media feeling fresh-faced and righteous, and none of us having a solution to any of it.

We have a desperate need to move on from there. 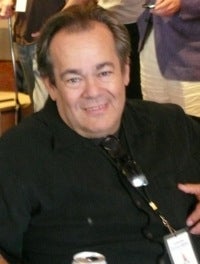 This much we know: What Arianna Huffington has attempted, is working. I find it vastly ironic, and instructive, to know that a non-professional journalist has figured out a formula to tap into the resources of the Internet, those of the informed average citizen, with a smattering (but only just) of trained news professionals to create a compelling product that now reaches upwards of 8 million unique viewers per month.

She is doing it with only nine reporters, she said, which means — let's be honest here — she's still relying in large part on the resources of the traditional media outlets whose stories she rewrites, repackages and tarts up with sexy headlines.

But HuffPo has the heat. If the hall was packed and a long line of hopefuls waited outside in the sun, it was to see Arianna and to learn what she has discovered about where journalism is headed. 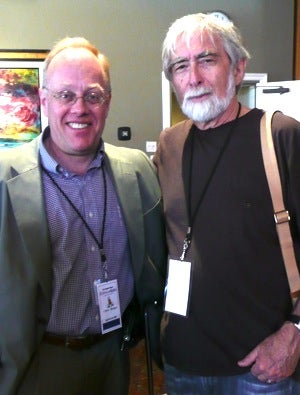 This is an upside-down state of affairs. It must be frankly painful for moderators like the L.A.Times' Jim Rainey, a good journalist and an intelligent man, to lead such discussions. These talks, just as ours today, tend to lead to the inevitable conclusion that what he does every day is in the rapid process of disappearing. (Arianna disputed that this was so, but gave no good reason, and certainly no economic argument, to support why.)

It is not a good thing, that newspapers are dying. It is just a reality. Cooper made the good point that we are in a revolutionary moment, akin to the arrival of the printing press in the 15th century. We will look back at this time as historic. After decades as top dog, decision-maker, and influence leader, the daily newspaper is now itself a daily news headline. But as the old dies, the new emerges. It is a time of opportunity. Change means risk. And to the bold will go the reward, I think. 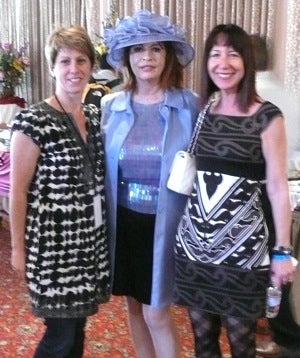 Andrew Donohue runs a site called voiceofsandiego.org, which is funded by a local philanthropist. That's one way to go. Similarly, Robert Scheer, pictured above with reporter Chris Hedges, works on a not-for-profit basis at Truthdig.com. And for certain kinds of journalism — investigative, long form, perhaps foreign affairs – that may be the only way to support its continuation.

But here at TheWrap we still believe there is a profit principle involved in doing smart journalism in the way readers want it — fast, accurate, deep, in context, and delivered on the platforms where they want to find it. We are bringing in the informed voices of our readership. They are improving our content, and the experience of being part of this community. That's a model that we believe works, and we're on the path to proving it.

(Photo at right: with Patt Morrisson of the L.A. Times and KPCC, and with Kim-From-LA, a book publicist extraodinaire.)