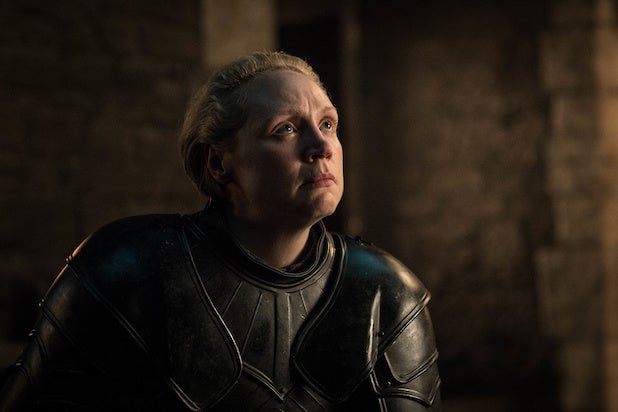 This week’s episode of “Game of Thrones” wasn’t “eventful” in the normal sense, but it was still jam packed with good stuff. And perhaps the best of all that good stuff was one of the scenes of Tyrion (Peter Dinklage), Jaime (Nikolaj Coster-Waldau), Brienne (Gwendoline Christie), Tormund (Kristofer Hivju), Davos (Liam Cunningham) and Podrick (Daniel Portman) sitting by a fireplace having a drink before the White Walkers and their army of the dead descend on Winterfell.

The particular scene I’m talking about is the one in which Tyrion slips up and refers to Brienne as “Ser Brienne,” before correcting himself because she hasn’t been knighted. This is a concept Tormund finds absurd, especially after Brienne explains that she isn’t a knight just because she’s, well, a she. Women don’t get to be knights, and the kings — and queens — of Westeros haven’t indicated at all that they planning on changing that tradition.

Also Read: 'Game of Thrones': Did Bran Just Hint That the White Walkers Will Win the War?

Jaime, though, is just not having this, and he declares that he can knight her himself — “You don’t need a king. Any knight can make another knight,” he says.

But in the past, all mentions of someone being knighted come with reference to the king doing it. So is what Jaime did there, knighting Brienne of Tarth, actually “legal”?

The answer is a resounding yes. Any knight can, in fact, make another knight. It’s just not a thing that is done often because knights don’t typically want to just go around knighting folks willy nilly because other knights would not generally be happy about that and it would, in theory, dilute the concept of knighthood. Knighthood is a symbol of status, and men love to hold themselves above others in any way they can.

But yes. According to the rules of knighthood, Jaime was well within his rights to knight Brienne.

Also Read: 'Game of Thrones': What Was That Song Podrick Sang?

We do have mixed feelings about this scene, though, because Brienne getting such an emotional moment right before the battle with the Night King and the army of the dead might indicate that she won’t survive the next episode. This is how these stories go — Brienne’s knighthood has been a long time coming, and is kinda the pinnacle of her story arc across the entire series.

So it would make sense for this moment to signal that her end is near. And that thought is just so upsetting. We’ll find out one way or another on next week’s “Game of Thrones,” when the Great War finally, really begins.