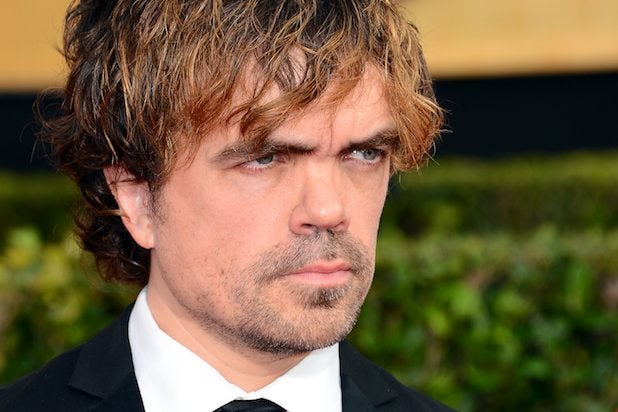 The actor participated in his first-ever Reddit AMA on Friday in support of a Kickstarter campaign for independent filmmaker Alexandre Rockwell’s “Little Feet,” a film about childhood that Steve Buscemi, Jennifer Beals, Sam Rockwell, Rosie Perez and Aidan Quinn are also lending a hand in raising money for.

“I’m trying to pick and choose a range of questions so it’s not just the usual stuff for you guys,” Dinklage told thousands of fans online. “There are already a million mainstream places to check if someone wants to know whether I’ve read the book series. I’m enjoying this as a place to weigh in on other, more important matters.”

But, of course, his fans questions reminded him that there is nothing more important than “GoT.” Here are seven things we learned about Dinklage on Reddit:

Dinklage’s biggest fear about “GoT” was having to wear “pointy shoes” and grow “a long beard.”
Q: How did the ‘Game of Thrones’ showrunners describe/pitch the role of Tyrion to you? What factors/concerns did you consider before accepting the part? Was it a difficult decision?

A: I have known David Benioff, he was an acquaintance, and I was a huge fan of his writing, so that really got me inquisitive about the project, that and HBO. I had one hesitation, because of the fantasy genre, I told him I didn’t want a really long beard and pointy shoes, and they assured me this character and this world wasn’t that. They told me about his complexity, the fact that he wasn’t a hero or a villain, that he was a womanizer and a drinker, and they painted a flawed and beautiful portrait of him, so i signed on.

Lord Varys is pretty creepy when the cameras are rolling, but it turns out he’s really funny when they’re not.
Q: Which cast member on Game of Thrones is the funniest off screen?
A: Conleth Hill! He’s a dear friend and fortunately I have a lot of scenes with him. And Lena, she’s also a dear friend and all we ever do is laugh together. When the three of us get together it’s a lot of fun.

All those really intense scenes between Tyrion and Cersei Lannister (Lena Headey) are actually really funny to shoot.
Q: I’ve heard that you and Lena Headey are good friends outside of acting together. Due to the intensity of Cersei and Tyrion’s relationship … do either of you need to do anything to get into that mindset of mutual hatred?

A: Sometimes we have to avoid eye contact so we don’t crack up!! It’s funny that sometimes people think with these serious scenes, people think the mood on set is very serious, but sometimes the most serious scenes can produce the most laughter on set. I miss working with Lena. We didn’t have as much as I’m used to this year. In the second season we had a lot of scenes together.

Indie movies are Dinklage’s favorite to be a part of.
Q: I know how much you love working in independent films, and supporting smaller films like “Little Feet.” With so much mainstream success, do you get much time to squeeze in these sort of projects?

A: I don’t even see it as squeezing them in, honestly. I make room for them. At this point in my career, it’s always about the scripts. These indie movies are basically only written by one person, which is huge. It’s not a team of writers picking the scripts apart and becoming a convoluted mess like some of the bigger projects … I’m on a TV show that sort of helps to pay the rent so that I have the freedom to tackle these smaller projects. I think it’s almost the duty of an actor to help out with smaller films and tell these stories that are infinitely better than some of the larger films.

The funniest thing that ever happened on set is…
Q: Hey Mr. Dinklage, do you have any hilarious behind the scenes stories about Game of Thrones?

A: There was one scene I was doing with Jerome Flynn, who plays Bronn. It was in season 1, I think, when I say something to a crazy woodsman guy. He asks, “How do you want to die?” and the line in the script was like, “At the age of 80 with wine in my belly and a girl’s mouth around my cock.” And I said… “Age of 80 and a girl’s cock around my mouth!” I inverted a couple of the words, and when I said that my friend Jerome couldn’t stop laughing, so we had to stop filming for the day.

A: Hmm… I know the worst advice ever given to me was “do it right”. As an actor you don’t really know what to do with that bit of direction. The best of advice, I love a quote from Steven Soderbergh. I read some advice he gave in an interview: Perseverance + talent= luck. There’s no such thing as pure luck, you just have to persevere and hopefully you have a modicum of talent. I love that quote, I think it really says it all.

The public’s reaction to Ned Stark’s death let everyone working on “GoT” know that it was a success.
Q: When did you realize that the show was going to be huge?

A: Mostly it was the Internet’s reaction to Sean Bean getting his head cut off. That’s when I knew we were getting big!