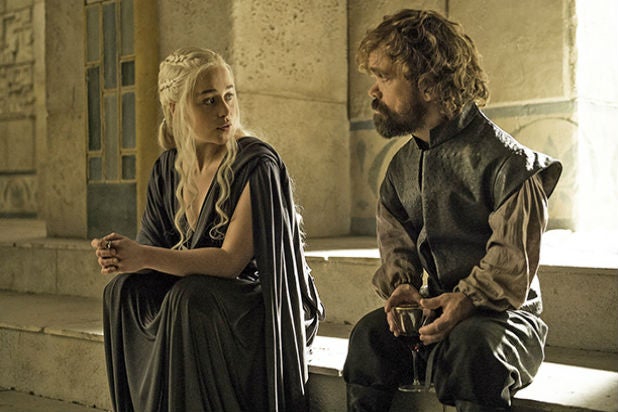 “Game of Thrones” Season 7 could be delayed by the weather, series creators David Benioff and D.B. Weiss said.

In an interview with Matt Serra and Jim Norton on the UFC Unfiltered podcast, the duo said Season 7 of the HBO fantasy drama will be “starting a bit later,” since winter has finally arrived in Westeros.

“We don’t have an air date yet,” Weiss and Benioff said. “We’re starting a bit later because at the end of this season, ‘Winter is here.’ And that means that sunny weather doesn’t really serve our purposes any more. So we kind of pushed everything down the line, so we could get some grim, gray weather even in the sunnier places that we shoot.”

The duo didn’t say whether or not the delay in production would be significant enough to push back the season premiere, but “Game of Thrones” typically starts airing in April. The recently wrapped sixth season, which debuted on April 24, had the latest premiere of any season in the show’s run. Season 3 started the earliest, with a first episode that aired on March 31.

There has been a lot of recent speculation about when the widely watched series, which has been renewed for a seventh season slated to premiere sometime in 2017, will come to an end. Weiss and Benioff have previously said that they’re considering a final pair of shortened seasons.

9 Shows to Get You Through 'Game of Thrones' Withdrawal (Photos)

You’ve got nine months until “Game of Thrones” returns; here’s what you can watch until then

HBO's "Game of Thrones" is done for another year, and now suddenly your Sunday nights have a big gaping hole in them. How do you deal with the withdrawals? Here are some shows to get "Thrones" fans through the offseason.