(Warning: This post contains major spoilers for the series finale of “Game of Thrones”)

Long live the Queen — in the North.

Sunday’s “Game of Thrones” finale revealed the fates of many beloved characters, but not all of their endings were as beloved or fitting as Sansa Stark’s (Sophie Turner), who after years and years of striving to get home to Winterfell and protect her ancestral home was finally able to get the North declared an independent kingdom and the ability to rule over her people as their queen.

Of course, it helped that her brother Bran Stark (Isaac Hempstead Wright) was named the King of the Seven Kingdoms, so he was more than happy to help liberate one of them for her and cut it down to six. And while some fans thought this was the perfect ending for the Stark formerly known as the Lady of Winterfell, Sansa had been a huge fan-favorite to take the Iron Throne (which we all know can’t actually be taken anymore, since it, well, melted).

TheWrap spoke with Turner, who still hasn’t seen the episode, as she’s “waiting to watch it with a support system,” and asked her if she thinks this ending was more fitting for Sansa than becoming the ruler of Westeros.

“I think it is a better thing for Sansa,” Turner told TheWrap on Monday morning. “I think Sansa, the one thing she always strived for throughout the whole series was to be back home — home, home, home. She wanted to be at Winterfell, with her family, with the North. It’s where she felt most comfortable, most safe. And she’s an incredibly capable ruler, absolutely. But I think Bran would be a much better ruler on the Iron Throne — well, not on the Iron Throne anymore but ruler of the Six Kingdoms — because as Tyrion kind of says, in order to move on with the future you have to look at our history and look at the mistakes we made and the things we did right and there’s no one better to do that than Bran because he knows everything, he knows all of our history. And he’d probably be a really just and fair ruler.”

“And I think Sansa, she stopped wanting that throne, she stopped wanting to rule over people the minute she got to King’s Landing,” the actress, who has played Sansa on the HBO fantasy series since she was 14 years old, said. “She’s not power hungry like that. She doesn’t need it, she doesn’t want it. And she’s seen what incredible power can do to a lot of people and she doesn’t want that. She just wants to be home in the place that she truly feels safe.”

See below for more of our interview with Turner, in which she tells us that “no one” in the cast ever guessed Bran would “win” in the end. She also reveals her favorite moment from the finale, which is “probably the funniest line Sansa has ever had.” 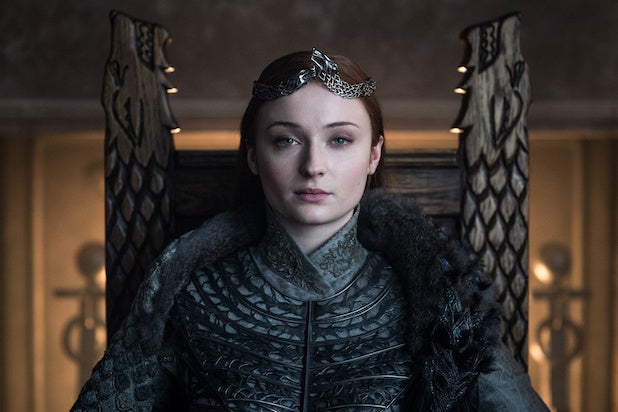 TheWrap: Did any of you in the cast at any point guess Bran would be the ruler of the Seven — Six! — Kingdoms?

Sophie Turner: No, none of us had guessed that Bran would be on the throne. None of us, no one. It was a shock. But then all of a sudden it just kind of made sense when we were shooting that scene and Tyrion (Peter Dinklage) said those words and it just kind of clicked, everyone was like, “Oh, yeah that makes sense. It’s the best thing for the Six Kingdoms.”

Each of the Starks left off in a different place, Bran ruling in King’s Landing, Sansa ruling in the North, Arya (Maisie Williams) setting sail to find out “what’s west of Westeros” and Jon (Kit Harington) back beyond the wall with the Wildlings and Tormund. How did you feel about the Starks being separated once again?
I never wanted the Starks to be separated, being together is a reason for each of their survival. But I think it’s the perfect scenario for all of them. Arya can’t stay in Winterfell, she has to wander. She’s a free bird and she has to go and explore and be on her own. And Jon, his people are the Night’s Watch, you know? They always have been, he’s been loyal to them for years and years and years. Those were his loved ones, his best friends. It makes sense that he stay at Castle Black. And for Sansa it definitely makes the most sense for her.

The moment when Sansa’s uncle Edmure Tully (Tobias Menzies) gets up to start to give his campaign speech for why he should be king and Sansa goes, “Uncle, sit down” was amazing. What part of the episode was your favorite?
OK, that was obviously my favorite moment. It was just great and it’s so funny because, like, that scene was just full of big, big players and then your uncle comes back who you haven’t seen in many, many seasons and he tries to give his spiel and I think everyone there is like, “Where were you? Where were you for any of this? Sit down. You haven’t been through any of this.” That’s my favorite moment actually. It’s probably the funniest line Sansa has ever had.

What was your reaction to Daenerys’ death and the fact Jon was the one to kill her?
It’s heartbreaking, really, because we’ve seen this woman grow up and it’s heartbreaking to see her go from such an innocent, vulnerable young woman and go from strength to strength to strength and become a true leader and a true warrior — and then being totally corrupted by power and becoming something of the “Mad Queen.” And so it was kind of horrible seeing that but it had to end that way, ever since her burning King’s Landing it had to be like that. Jon had to do it to be just and to be fair and for the benefit of the rest of the world. But I thought it was a beautiful scene. I thought it was heartbreaking, but it was beautiful.

On Sunday after the episode aired, Twitter started coming up with spinoff ideas for Arya, like, “West of Westeros.” What would would you want Sansa’s spinoff to be about/titled?
Oh my God. I don’t think they would make a spinoff show about Sansa because I would hope that she would have a very mundane and fairly boring life after that. I would hope that she didn’t have to go through anything else as dramatic as she has in the past 10 years. Just rule fairly, there will be no wars, no battles, she’d die of old age with the people who love her.