With the news that HBO is working on four potential spinoffs for “Game of Thrones,” fans of the series are churning ideas in their heads.

We don’t know much about what’s in store, minus that they’ll “explore different time periods of George R. R. Martin’s vast and rich universe” and will be tackled by four different writers.

Of course, considering there is such a well-documented and complex world to explore, we can make some guesses about what could be adapted next. Beware of many book spoilers below.

Martin’s ongoing series of novellas set before the events of “Game of Thrones” follows Ser Duncan the Tall and his squire “Egg” in their adventures across the Seven Kingdoms. Duncan goes on to become a hedge knight — or a knight without a master — and gets wrapped up in conflicts around the kingdom. The stories take place roughly 90 years before the main events we know from the books and the show, but are important for a few reasons: Duncan becomes a legendary member of the Kingsguard — the knights that protect kings in Westeros — and was revealed to be an ancestor of Brienne of Tarth. Egg grows up to become Aegon V Targaryen, great-grandfather of Daenerys, and ruler of the Seven Kingdoms. It’s a series of novellas — so there’s already plenty of material to be adapted, and many more installments are planned.

2. The Dance of the Dragons

“Dance with Dragons” is the name of the fifth book in the series, but it also refers to a famous civil war in Westerosi history that took place around 200 years before the current war. It’s a long and complicated event, but it borrows a lot of the same political intrigue that people enjoy from the HBO show. Basically, in the early days of the Targaryen dynasty, King Viserys I’s second wife, Alicent, was feuding with Viserys’ daughter, Princess Rhaenyra, who was his own surviving child through his first wife and was basically groomed to be queen. However, upon Viserys’ death, Alicent formulated a plan to get her son Aegon onto the throne. Rhaenyra, denied her birthright, fought with Aegon in a war that tore the Seven Kingdoms apart. The event war was described as the “Dance of the Dragons,” of course, but Martin published a novella called “The Princess and the Queen” in the anthology “Dangerous Women” that goes more in-depth into the story. There’s also “The Rogue Prince,” another novella that tells of the events before the war.

3. The Rise of the Targaryens

The Targaryens weren’t always in charge of the Seven Kingdoms. Before that, they were lords of Valyria, which was a large territory in what is now known as Essos (the place where Daenerys has been roaming for six seasons). However, Valyria crumbled in a great catastrophe, which is not fully explained. Around a century after that fall, they came to conquer Westeros. Aegon I — the first king — united the territories under one ruler for the first time. There’s so much to this family’s history that it would be impossible to do it all in one series, but there will be dragons and there will be war. 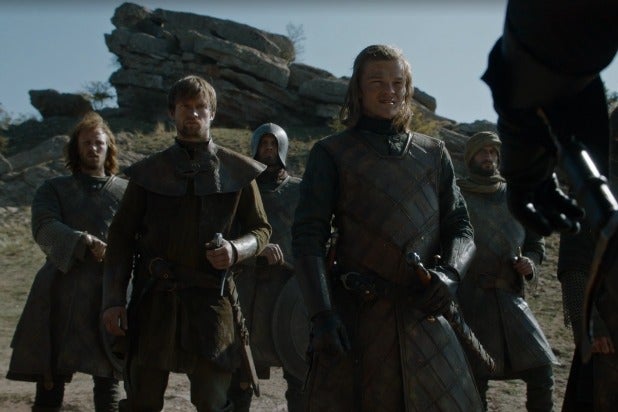 This is jumping forward quite a bit in time — to just before the events of “Game of Thrones” began. This is the event that started it all: the wildfire, the intrigue, the bastard sons… everything. They talk about it a lot in the show, but the convoluted history tends to get lost on non-book readers. Robert Baratheon’s bride, Lyanna Stark, was seemingly stolen from him by Rhaegar Targaryen after a now infamous joust. This began the aforementioned rebellion, which brought nearly all of the corners of the Seven Kingdoms together to take down the Targaryens, who were then ruled by “Mad King” Aerys II. We know how it ends: Robert becomes king, marries Cersei Lannister, and things go downhill from there. Seeing this plot line as a show would allow writers to explore all the perspectives of the rebellion — from Rhaegar and Lyanna’s relationship to the bromance between Robert and Ned Stark. It’ll also give creators the opportunity to bring a lot of characters back.

Also Read: 'Game of Thrones' Season 7: Everything We Know So Far (Photos)

This would be going quite a ways back, but it would allow viewers to see a lot more “Game of Thrones” fantasy elements. The Andal Invasion is known as the moment when the magic of the old world began to die out. The Andals were warriors from Essos that conquered Westeros away from the First Men and the children of the forest, who had made a peaceful pact. You may recognize the children of the forest from Bran Stark’s time in the North. They’re a mysterious, non-human race. The First Men, unlike the Andals, worshiped the Old Gods, which people like Melissandre and the Starks worship. There’s not much here in terms of story but that allows for the writers to get creative. Plus it allows them to explore the vast mythological beings that once ran around the countryside, like dragons and direwolves.

OK, so this is not so much an idea as a salient point: The great thing about the universe that Martin created is that he’s left a lot of room for interpretation and world-building. He — along with fans — love delving into the history behind the great houses of Westeros, their ancestors, and how everybody got there. There are even fan-favorite characters that don’t get the proper amount of screen time that could make for stars of a spinoff or sequel, as long as they manage to survive the current timeline. Trying to guess what HBO or Martin can plan for these potential spinoffs is almost impossible because there’s so much to learn about “The World of Ice and Fire,” but that’s what makes us such big fans.