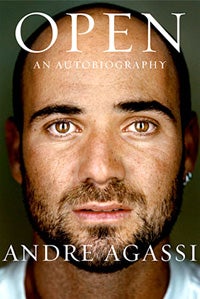 Well, that explains the DayGlo.

Tennis legend Andre Agassi — eight-time Grand Slam champion, former world number one (and one of my boyhood idols) — admits in an upcoming memoir that he did crystal meth.

The book, “Open,” is scheduled to be published on November 9 by Knopf, which had bid a reported $5 million for the memoir.

In tennis’ answer to Mackenzie Phillips, Agassi writes that he was offered meth by an assistant (who he calls “Slim”) in 1997 – then ranked 141 and anxious about his upcoming wedding to Brooke Shields – and accepted it. Dozens of times.

Agassi is giving “60 Minutes” the exclusive post-meth admission interview; Sports Illustrated and People bought first serial rights in the U.S., and are publishing excerpts this week.

One problem: thanks to the Times of London, the key passages are already out there. Like this one, via the Miami Herald:

As if they’re coming out of someone else’s mouth, I hear these words: You know what? F— it. Yeah. Let’s get high. Slim dumps a small pile of powder on the coffee table. He cuts it, snorts it. He cuts it again. I snort some. I ease back on the couch and consider the Rubicon I’ve just crossed.

There is a moment of regret, followed by vast sadness. Then comes a tidal wave of euphoria that sweeps away every negative thought in my head. I’ve never felt so alive, so hopeful, and I’ve never felt such energy. I’m seized by a desperate desire to clean. I go tearing around my house, cleaning it from top to bottom. I dust the furniture. I scour the tub. I make the beds.

When Agassi was informed of a failed drug test by an ATP tour official, he writes:

There is doom in his voice, as if he’s going to tell me I’m dying … He reminds me that tennis has three classes of drug violation. Performance-enhancing drugs … would constitute a Class 1, he says, which would carry a suspension of two years. However, he adds, crystal meth would seem to be a clear case of Class 2. Recreational drugs. That would mean a three-month suspension.

My name, my career, everything is now on the line. Whatever I’ve achieved, whatever I’ve worked for, might soon mean nothing. Days later I sit in a hard-backed chair, a legal pad in my lap, and write a letter to the ATP. It’s filled with lies interwoven with bits of truth.

I say Slim, whom I’ve since fired, is a known drug user, and that he often spikes his sodas with meth, which is true. Then I come to the central lie of the letter. I say that recently I drank accidentally from one of Slim’s spiked sodas, unwittingly ingesting his drugs. I ask for understanding and leniency and hastily sign it: Sincerely.

But perhaps more shocking is this revelation: Hair loss forced Agassi to wear a fake Mohawk (a literal faux-hawk) at the French Open.