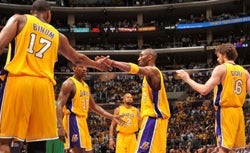 The NBA Finals dominated the airwaves yet again on Tuesday night. Game six of the series between the L.A. Lakers and the Boston Celtics propelled ABC to an average 4.8 rating/14 share from 8-11p.m. in the key adults 18-49 demo. The alphabet network brought in more than 40 percent more viewers than their closest competitor, FOX.

President Obama’s address to the nation pre-empted shows on all of the major networks last night. Obama spent 20 minutes starting at 8p.m. outlining his "battle plan" against the oil spill in the Gulf of Mexico. While the President made his speech, his wife and daughters were at the Staples Center watching the basketball game from a luxury skybox.

GOING SEVEN Faced with elimination, the Lakers beat the Celtics 89-67 on Tuesday forcing a decisive game seven. ABC execs might have been the only people who were happier than the players to see this go seven games. The finals have been doing great numbers for them. Tuesday’s game got an average of 5.4/15 with a peak score of 5.7/17 coming in the final half hour. Game seven airs on ABC Thursday night at 9p.m.

SECOND PLACE Fox got the second biggest audience of the night with a 2.6/8 average. The network aired episodes of "Hell’s Kitchen" from 8-10:30 after the President’s speech.

NBC’s MIXED BAG The peacock aired new episodes of two different reality shows last night– to decidedly mixed results. "America’s Got Talent" scored second place from 9-10p.m. against "Hell’s Kitchen" on Fox and CBS’ repeats of "NCIS" and "NCIS: Los Angeles." The show got an average of 2.9/8. NBC’s other reality series, "Losing It With Jillian" lost big coming up third against "Hell’s Kitchen" and the CBS repeats in the first hour of primetime with an average of 1.4/4.