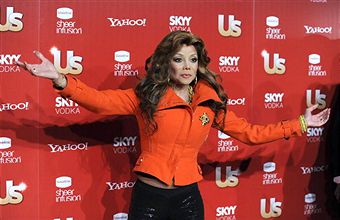 In real life, the geeks rule the cool table. The kids from Fox’s “Glee” — including Mark Salling and Jenna Ushkowitz — welcomed Audrina Patridge in to their prime corner-table real estate at US Weekly’s “Hot Hollywood” party Wednesday night. When fellow partygoers Adam Lambert and Kris Allen were duking it out for the Idol crown six months ago, the chorus kids would have been as happy as their characters to score an invite to party with the cool kids. 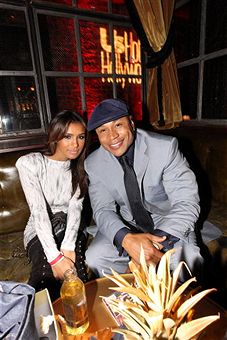 Industry fans were (inexplicably) surprised to see the show’s wheelchair-bound-on-TV Kevin McHale bouncing around Voyeur at the weekly’s annual fall bash. Before making it inside where guests rejoiced over unlimited Skyy vodka bottle service and True Religion denim handouts, La Toya Jackson channeled a “This is It” pose on the carpet (above; Getty Images).
“The Office’s” Jenna Fischer showed up to claim a “Hot Employee of the Year” award, and LL Cool J sported his trademark Kangol cap (with Pussycat Doll Melody Thornton; Getty Images) in the corner opposite the Glee kids. Cool J’s NCIS: L.A. partner Chris O’Donnell probably had a hard time picking up his “hot action team” award from two miles away at GQ’s simultaneous “Men of the Year” party at Chateau Marmont. (Below left, O’Donnell with Dexter’s Jennifer Carpenter and recent SNL “hostess with the leastest” January Jones at GQ; Getty Images). US’s bash wound down before midnight as stars were eager to catch Katy Perry perform for the launch of Samsung’s Behold II cell phone over at Boulevard3 in Hollywood. Most of the same faces hit their second red carpet of the night. 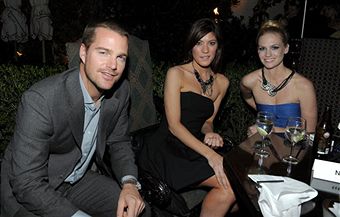 Inside the Chateau at GQ, there was an impromptu episode of “Inside the Director’s Studio” as Clint Eastwood chatted with Quentin Tarantino (who later fired away with fellow “Inglourious Basterd” Eli Roth). Christian Slater and Kobe Bryant proved popular, and the comics in the crowd cliqued up – Rainn Wilson, Zach Galifianakis, Paul Rudd and Sarah Silverman.
For a quieter night, some stars hit the premiere for “Ben 10: Alien Swarm” on the Warner’s lot, a live action take on Cartoon Network’s animated hit "Ben 10: Alien Force." “Extra” host Mario Lopez walked across the lot to attend, as did Dominic Purcell (“Prison Break”).
And finally, an appropriate footnote level placement on the night goes to former political prop, and current “Playgirl” poser, and yellow pocket square model Levi Johnston — 2009’s version of Kevin Federline. The Alaskan hit both magazine bashes – US Weekly and GQ. Let’s hope one of the gift bags had a watch in it. Tick, tick, tick…