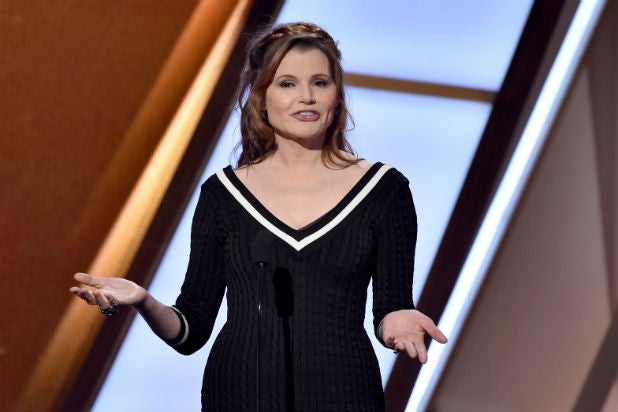 Oscar winner Geena Davis and ARC Entertainment have teamed to launch the Bentonville Film Festival, which is designed to champion women and diversity in film. The festival, which will take place from May 5-9 in Bentonville, Arkansas, will be the first and only film competition in the world to offer guaranteed theatrical, television, digital and retail home entertainment distribution for its winners.

BFF, which is being hosted by ARC Entertainment, Walmart, Coca-Cola and AMC Theatres, will be chaired by Davis and will screen approximately 75 films in competition, ranging from studio premieres to independent features and documentaries.

See photos: 40 Actresses Over 40 Who Are Still Conquering Hollywood (Photos)

While individual activities for each advisory board member will vary, they will include garnering support within the entertainment industry, leading mentorship activities, film selection input, festival jury participation, defining success metrics and measuring effectiveness of programs, and offering broad strategic counsel.

“It all started when my daughter was a toddler,” Davis said. “I didn’t intend to take it this far. At first, I was just going to bring it up in industry meetings. When I told people, ‘have you ever noticed how few female characters there are in TV and movies?’ it surprised me how nobody noticed. And that’s what made me decide to do some research. I discovered, for example, that only 17 percent of crowd scenes in film, live action and animation, are female. Also, no one realizes the ratio of male to female characters has been exactly the same since 1946.”

Films that receive the Audience, Jury Selection and Best Family Film awards at the Bentonville Film Festival will receive a distribution agreement with a guaranteed traditional theatrical release on a minimum of 25 screens from AMC Theatres, which will also participate in the film submission and jury selection process.

Davis herself broke ground with her portrayal of the first female President of the United States in ABC’s hit show “Commander in Chief.”

“Studies showed that people who were familiar with the show were 68 percent more likely to vote for a female candidate for president which is very significant. It just proves the point that when people see something, it becomes normal. They get used to it,” she said.

In addition to the film screenings, the Bentonville Film Festival will include a star-studded award show hosted by Davis and presented by Kraft Foods Group, multiple panel discussions with celebrities and industry leaders, and family film night events that will be free to the public and held in exciting non-traditional venues.

Following the debut of the event, the Bentonville Film Foundation will launch a year-round event calendar to promote women and minority filmmakers, artists, directors, and producers at colleges and universities around the country in partnership with the Geena Davis Institute on Gender in Media, which is the official non-profit partner of the festival.

Film submissions for the festival will open on Jan. 15, 2015, with films accepted into competition being announced in March 2015.

A long-time advocate for women, Davis is the founder and chair of the non-profit Geena Davis Institute on Gender in Media at Mount St. Mary’s College, the only research-based organization working with media and entertainment companies to engage, educate and influence the need for gender balance, reducing stereotyping and creating a diverse and inclusive range of female characters for entertainment targeting children 11-and-under.

Davis was recently appointed Special Envoy for Women and Girls in ICT for the UN’s International Telecommunication Union.  Davis is the chair of the California Commission on the Status of Women, and she’s also an official partner of UN Women, working toward their goal of promoting gender equality and empowering women worldwide.

“We are proud to be associated with this meaningful and groundbreaking initiative. Filmmaking has a measureable impact on society and culture as a whole. The Bentonville Film Festival’s goal is to build a research based, commercially viable platform which will support a full offering of creative endeavors for female and minority content creators representing their perspectives which can often be crowded out in larger, franchise film projects. The BFF is differentiated from other festivals in that it will benefit from the support of the world’s largest retailer and blue chip sponsors such as Coca-Cola, Kraft Foods and AMC Theatres. This support enables the BFF to offer groundbreaking, meaningful, and commercially viable prizes and capital to support film making that celebrate women and diversity,” said ARC Entertainment CEO Trevor Drinkwater.

“I am so very proud of our Global Initiatives supporting Women and Diversity. This Festival will give Walmart an opportunity to advance that initiative through our support of the film industry.  We are also very proud of the town of Bentonville and look forward to ‘showing it off’ to the world,” added Stephen Quinn, CMO of Walmart.