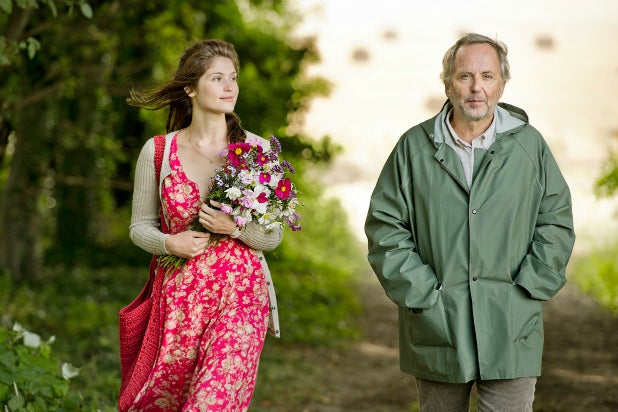 We’re used to directors working with the same actors more than once, but it’s much more rare to connect a performer with an author whose work is being adapted to the screen, unless that author is William Shakespeare. The last example that comes to mind is Richard Benjamin, starring in the back-to-back Philip Roth movies “Goodbye, Columbus” and “Portnoy’s Complaint” during the Nixon era.

While Benjamin was the ideal manifestation of a certain brand of Roth hero, actress Gemma Arterton steps up as another complex and bewitching Posy Simmonds heroine in “Gemma Bovery.” It’s a complex relationship between author, actor and character, since Simmonds’ graphic novels put a modern spin on classic literature: “Tamara Drewe,” adapted by Stephen Frears in 2010, imagines a contemporary replay of “Far From the Madding Crowd,” set in Thomas Hardy’s own backyard, and now “Gemma Bovery” takes it cues, as the title suggests, from Gustave Flaubert.

Director Anne Fontaine (“Coco Before Chanel,” the risible “Adore”), collaborating with legendary screenwriter Pascal Bonitzer (“My Favorite Season,” “La Belle Noiseuse”), keeps Simmonds’ narrative structure, and in so doing, underscores the notion that what we’re watching isn’t merely the life of a complicated woman, but rather the actions and choices of that woman as seen through a man’s eyes and a man’s judgment.

That man is baker Martin Joubert (Fabrice Luchini, “In the House”), whose life in a small Normandy town is irrevocably shaken up by the appearance of his new British neighbors, Charlie (Jason Flemyng) and Gemma Bovery (Arterton). Martin is flummoxed by the coincidence, since “Madame Bovary” was set in their corner of France, and he finds himself inexorably drawn to her every move. (The fact that she looks like Gemma Arterton, of course, probably would have been enough to stoke Martin’s interest.)

Gemma follows in her literary namesake’s footsteps, to some extent; she and her husband have financial difficulties, his indifference drives her into a passionate affair with rich, callow young student Hervé de Bressigny (Niels Schneider, “I Killed My Mother”), and Patrick (Mel Raido, “The Informers”), an old flame from Gemma’s past, pops up to tempt her as well.

While Gemma gets to have her say only through a diary that Martin has filched, she exists for the most part via the bits and pieces that Martin is able to string together via borderline stalking. She never gets to be her own woman, but instead the creation of the men around her.

It’s a strategy that opens an interesting can of worms — are the “difficult” heroines of literature, Emma Bovary among them, only so difficult because they were written by unsympathetic male authors? It’s a question the film wisely never tries to answer, but it does culminate in a brilliant sequence in which Gemma’s fate is sealed not by her own actions but by the possessive, obsessive men in her orbit.

Arterton must no doubt be hoping that Simmonds tackles another literary heroine, since “Gemma Bovery” and “Tamara Drewe” have offered the actress her richest film roles. Hollywood appreciates her as a sexpot in boy-fantasies like “Prince of Persia” and “Runner Runner,” but rarely has she shone so brightly and with such depth on the big screen as with these two characters.

It helps that she has such a wonderful foil in Luchini, a veteran comic leading man for Eric Rohmer and François Ozon. Martin is so smitten with Gemma that he sputters and dithers all over the place, much to the bemusement of his patient wife Valerie (Isabelle Candelier), and his droll turn makes the movie as much his as it is Arterton’s.

You don’t have to know “Madame Bovary” to enjoy “Gemma Bovery” — the movie rather helpfully footnotes itself in that regard, in fact. Whether you’ve read Flaubert or not, it’s a sharp comedy of manners anchored by two wickedly witty performances.