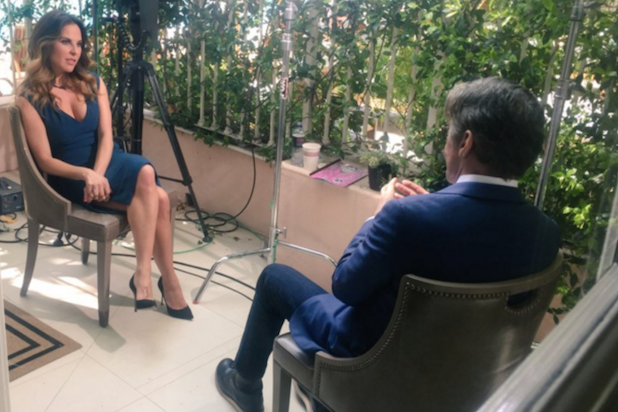 The veteran broadcaster says El Chapo, the head of the Sinaloa Drug Cartel, was a huge fan of “La Reina del Sur,” a Mexican primetime soap opera in which del Castillo played a drug queen pin.

“Kate plays the female version of El Chapo and he is obsessed with her character, Teresa Mendoza,” Rivera told TheWrap. “When he was finally caught in the bloody shoot out, what does he have with him in his meager possessions as he’s been on the lamb for months? He has the entire DVD collection of ‘La Reina del Sur.'”

The name of Rivera’s upcoming special “Beauty & the Beast – When Kate met Chapo” was inspired by the bizarre relationship.

“That’s why I called it ‘Beauty & the Beast,’ because I submit that beauty led to the capture of the beast, in this case,” Rivera said. “The world’s most wanted man was reckless and threw caution to the wind to communicate — and arrange a jungle rendezvous — with the object of his obsession.”

During the special, Rivera sits down with del Castillo to discuss her relationship with El Chapo and the top-secret meeting she had with the drug lord and Sean Penn, which resulted in a controversial article in Rolling Stone magazine.

But before it premieres, TheWrap caught up with Rivera to talk about the show.

TheWrap: Do you think Kate de Castilla was intimate with El Chapo?
Geraldo Rivera: She denies it. She describes them having a long dinner, her getting tipsy on tequila (this is on camera). And then El Chapo taking her arm, leading her away from the table and then just the two of them walking to the area where he shows her a bedroom, saying: “you’re going to sleep here.” He sits her down and tenderly, in Kate’s recounting, and says “you’re not going to see me again,” and then disappears into the jungle. She passes out, wakes up an hour or so later and is awoken rudely by the producers and Sean Penn saying, “come on, come on we’ve got to get going.” That’s Kate’s recounting. She talks about how tenderly he took her to her bedroom and then left her there and disappeared. Kate’s account is that they were not intimate in the conjugal sense.

As a journalist, was Sean Penn wrong to cover El Chapo the way he did?
In general, Sean Penn acting as a journalist is totally appropriate. Why not? There are people that go to journalism school, others who just say they’re reporters and learn form the bottom up. If you want to see something, write it down and tell a story then you are a reporter. You may not be working for a journalistic outfit, but I think Sean Penn legitimately was working as a reporter when he went to the Mexican jungle, at considerable physical risk to his own safety. Now, the job he did showed that he was an amateur — but that’s a different story.

What issues did you have with his story?
Several things bother me. First of all, he sat at dinner with El Chapo and Kate del Castillo [with her] translating a long conversation. Sean Penn did not write down or remember a single quote from the entire dinner, which seems almost inconceivable to me and very amateurish. Maybe it’s not written down, but you have to remember what the world’s most wanted man was saying. Otherwise, what were you doing there — enjoying the tacos?

What else?
The biggest flaw in Sean Penn‘s reporting was the allegation that the party — Kate, Sean and producers — came upon a Mexican marine roadblock on the journey to meet El Chapo. According to Penn’s account in Rolling Stone, the Mexican marines saw them as they approached and sheepishly, almost embarrassed, waived them through to meet [El Chapo]. The implications of that are profound. Meaning that, the Mexican government or the Mexican military at least, was complicit in El Chapo’s escape and the fact that he was at large. Kate and the producers absolutely deny that they came upon any roadblock involving the Mexican military. The DEA, and I asked them up to the highest levels, also believe that it never happened. They say that Sean Penn made it up to seem more dramatic and to make it seem like the Mexican government was complicit in El Chapo’s fugitive status. That to me is the biggest flaw, much more serious than the fact that he kind of gave El Chapo editorial say on the final product.

Do you think the Rolling Stone story resulted in his capture?
Yes, I do. We’ve been told that, not only by our DEA that they were tracking the party when they went to the clandestine meeting, but more importantly, even before Kate’s name was attached to it. The Mexican Attorney General blamed the capture on the fact that they had this meeting. When you look at it objectively, they were texting in the open. Kate directly to Chapo, directly back to Kate. They were texting in the clear. They had no scrambling, no cypher, no exotic devices to disguise their identity. It was ridiculously amateurish. I can only think, and I think it is fair to surmise that it was El Chapo’s obsession with Kate. His burning desires to see the object of his obsession that led to his capture.

Other than the whole drug lord thing, does it seem like Kate thinks El Chapo is sort of a good guy?
There is no doubt. Remember this whole thing starts a couple of years ago when Kate writes a digital missive; they call it in Mexico the Chapo Carta, where she writes to El Chapo. [She wrote] I know you’re not responsible for everything, imagine how nice it would be if you devoted your tremendous energy and competence to good rather than evil. She put that out there. A very long note, kind of a love note. A fan letter to El Chapo that she put on Twitter. A coupe of years later, El Chapo’s lawyer responds to Kate. That’s what starts the process.