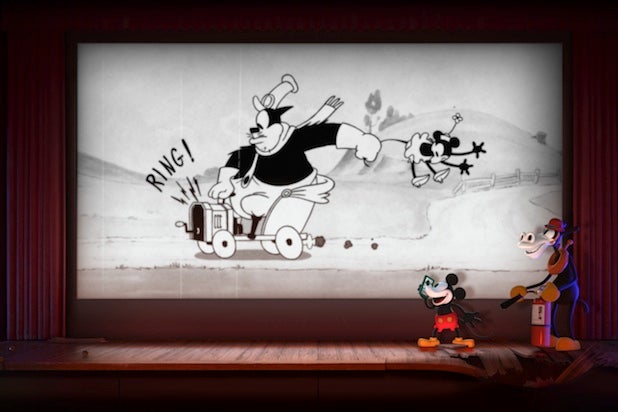 A version of this story originally appeared in OscarWrap: Foreign Language/Documentaries

Talk about a daunting reboot. With “Get a Horse!,” director Lauren MacMullan wasn’t just reviving a tradition of Disney short animation that had won the company more than a dozen Academy Awards over the years. She was also adopting early Disney animation style, and taking as her leading man — sorry, leading mouse — none other than Mickey Mouse, the character on whose back the entire Disney dynasty was formed.

“Strangely enough, I just kind of kept my head down and tried to do it,” MacMullan told TheWrap. “It wasn’t until later, after it was done, that I felt the full weight of that responsibility.”

“Get a Horse!” is a spectacular romp that begins as a 1930s style Mickey cartoon but then breaks through the screen, blending old and new styles and techniques, black-and-white and color footage, 2D and 3D. It started with a simple idea from MacMullan, a TV director who had gone to Disney to work on “Wreck-It Ralph” and responded to a studio-wide initiative to come up with new ideas for the company’s classic characters.

“I had one little image, which was basically a black-and-white Mickey with his foot stuck out of the screen, going into color and CG,” she said. “It was a really short, terrible pitch, because in TV you never have to pitch to anybody. I was like, ‘We could make it like a lost short, and then he comes out at ya!’ Luckily, John and Ed saw the promise in that,” she said, referring to animation brass John Lasseter and Ed Catmull. “They liked the idea of going dimensional, and they also realized, ‘Hey, we have 2D animators here like Eric Goldberg who can actually do this style.'”

For the next 18 months, MacMullan storyboarded the short several times, and worked with other writers to come up with enough jokes to sustain the short’s manic energy. “We had to come up with so many gags,” she said. ‘The end of the short is about four minutes of one shot, and you have to treat it like a play where everyone’s out on the stage the whole time. It’s fiendishly difficult to make joke works in different places around the screen, and you need to track where your eye is going.”

In one way, though, she was helped by the spirit of the early Mickey Mouse cartoons, which were more anarchic than the character later became. “There’s a lot of freedom in the animation itself, and in what Mickey can do,” she said. “He’s a little bit more of a scamp – he can pull tricks on people and make people laugh. There’s kind of a freshness and a freedom to that era that extrapolated all the way through making the short.”

The 2D team, led by veteran Disney animator Eric Goldberg, worked hand-in-hand with the CG animators, who had to get their computers to stop drawing perfect circles and tubes and give the old-style Mickey some of the imperfections that gave him character. “CG does things really perfectly,” she said. “You automatically get a perfect sphere a perfect tube. But that looked too cold – it was hard to get CG characters to express the kind of warmth that those 2D characters had.”

Also read: How ‘Wreck-It Ralph’ Wrecked All the Rules of Animation

For reference, she said, the animators went back to a single image from “Steamboat Willie,” one of the earliest Mickey cartoons. “It’s an image where Minnie has just arrived on the boat, and Mickey walks into the frame. They’re looking at each other, and they look delighted with each other. They’re really simple, rudimentary drawings, and they have all of this warmth and love in them. So we went back to our CG Mickey and Minnie and made them as close to that drawing as we could. And that meant lumping things up and making things imperfect.”

The filmmakers also worked with old recordings of Walt Disney himself for Mickey’s voice – and came up with a result so seamless that MacMullan now has trouble getting everyone to believe that “Get a Horse!” is entirely new.

“In a way, we’re a victim of our own success,” laughed MacMullan, who became the first woman to receive a solo directing credit on a Disney theatrical short. “I guess we duplicated the look of a 1938 cartoon so well that no matter how many times we tell people it’s all new, some of them still think that we must have found some old footage.”