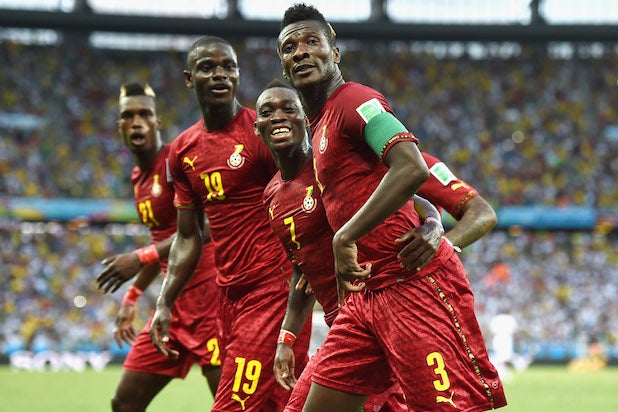 Wharton-Rigby’s (pictured left in hat) script will follow a courier who’s tasked with bringing $3 million to an African soccer team, which refuses to play until its paid — in cash. Things go awry when the courier is ambushed on the way to make the drop, leaving him less than 12 hours to recover the stolen money.

The story is inspired by current events surrounding the World Cup in Brazil, where the government of Ghana delivered $3 million in cash in order for its team to continue playing. Ghana’s soccer club said they hadn’t been paid the appearance fees they were promised, while the nation’s Deputy Sports Minister, Joseph Yamin, said payment was delay because players and government officials couldn’t agree on the form of payment.

Bugeater’s Dan Mirvish (right) and Barry Hennessey (below) will produce the movie.

“The world has soccer fever and Hollywood has caught it,” said Wharton-Rigby (“Homicide: Life on the Streets”), an award-winning writer who most recently wrote and directed the indie movie “Stay,” which was filmed in Japan.

“Barry and I have been looking to produce something with Darryl for a long time and his take on current events captures a truly global story and melds it with classic Hollywood sensibilities,” said Mirvish.

“I’ve shot extensively in both Ghana and Brazil, and this is a perfect project to capture the raw energy that both countries have to offer,” added Hennessey, a four-time Emmy-winning producer of “The Amazing Race.”