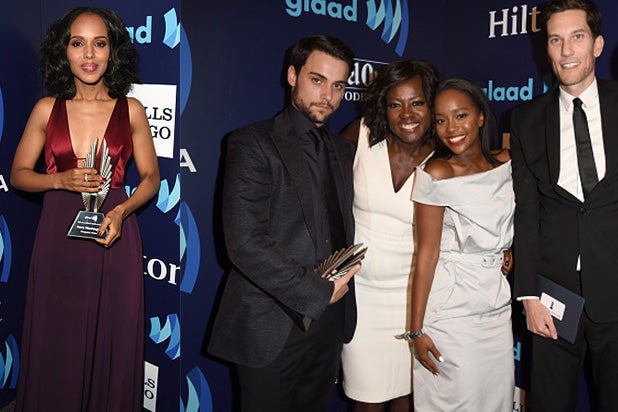 Actress director Roland Emmerich and TV hits including “How to Get Away with Murder” were saluted in Beverly Hills Saturday, as GLAAD held its annual Los Angeles Media Awards ceremony at the Beverly Hilton Hotel.

Washington accepted the Vanguard Award from presenter Ellen DeGeneres, a prize handed to a significant ally of the LGBT community. She joins a prestigious group of former winners includuing Elizabeth Taylor, Aaron Spelling and

Emmerich received the Stephen F. Kolzak Award from , highlighting those working to eliminate homophobia within the entertainment industry.

“Transparent” and “How to Get Away with Murder” won best comedy and drama series respectively, with outstanding film going to The Weinstein Company’s “The Imitation Game.”

Outstanding Drama Series:
How to Get Away with Murder, ABC  (accepted by creator Peter Nowalk with stars , Jack Falahee, Matt McGorry, and Aja Naomi King)