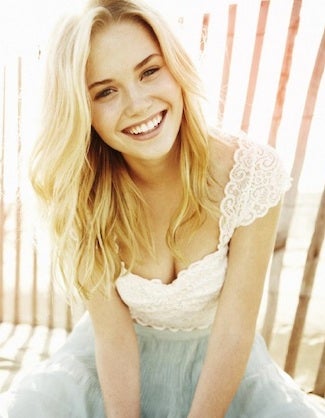 California girl Ginny Gardner is going to turn heads on ABC’s “The Goldbergs” — the actress has landed a recurring role on the new fall comedy, TheWrap has learned.

She will play Carrie, described as the “bananas hot” classmate of Barry Goldberg (Troy Gentile) who has had a crush on her ever since she lent him a pencil in school.

Her first episode will air in October and revolves around Homecoming and a Halloween party, to which Barry decides he is going to ask her. His mom, Beverly (Wendi McLendon-Covey) shows up at the party in disguise hoping to protect her son from disappointment — and things go very, very wrong for Barry.

Gardner’s television credits include Fox’s “Glee,” in which she played an online love interest of Ryder’s (Blake Jenner), Katie, who turns out to be Unique (Alex Newell), Disney XD’s “Lab Rats” and The CW’s “Hart of Dixie.” Next year, she appears on the big screen in teen time travel adventure, “Almanac.”

Written and executive produced by Adam F. Goldberg (“Breaking In,” “Fanboys”), “The Goldbergs” is set in the 80s and follows the misadventures of an 11-year-old Adam and his offbeat family. It airs Tuesdays at 9/8c. It debuted last week to 8.94 million viewers and a 3.1 rating/8 share in the advertiser-coveted Adults 18-49 demographic.

Gardner is represented by ICM Partners and manager Richard Kerner.