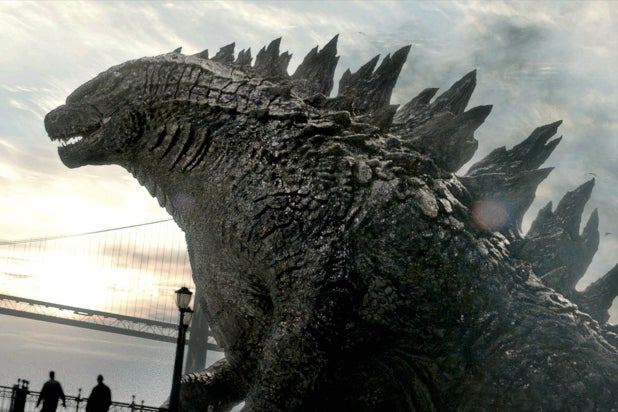 What do Godzilla and Esther Williams have in common? They both became famous for doing one specific thing: smashing cities and battling other giant monsters, and swimming and diving in complexly choreographed musical numbers, respectively.

When you think back on Williams’ lavish musicals for MGM, however, you’ll be hard-pressed to remember a single moment that doesn’t take place in or under the water. Similarly, affectionate recollections of the Japanese Godzilla films have more to do with screeching and stomping and showdowns with Mothra and Hedorah than they do with those interminable scenes of concerned scientists and distraught moms.

All that padding was a necessity of budget: neither building a miniature Tokyo nor putting a guy in a rubber suit to step on it comes cheap, so you’ve got to fill the rest of the film with relatively inexpensive scenes of guys in lab coats anxiously staring at radar screens. Now that a big Hollywood studio like Warner Bros. is making its own “Godzilla,” of course, you would imagine that they could go wild with the special effects and give us scene after scene of Godzilla inflicting property damage and saving humanity from scaly, slimy leviathans, right?

Apparently not, if this new movie is any indication.

When Godzilla all too infrequently gets to be on screen to do his thing, “Godzilla” hits that monster-movie sweet spot with the kind of action that kaiju fans have come to crave. Most of the time, however, this feels like a retread of “World War Z,” with a handsome American trotting the globe in the hopes of quelling an international crisis. The handsome American this time is soldier Ford Brody (Aaron Taylor-Johnson); we learn in flashbacks that he spent his childhood in Japan, where his nuclear engineer parents Joe (Bryan Cranston) and Sandra (Juliette Binoche) worked on a reactor until an underground earthquake caused a catastrophe that killed several people and closed down the entire area due to supposed radioactivity.

See video: How the U.S. Air Force Would Fight Godzilla, for Real

Over the years, Joe has become a wild-eyed conspiracy theorist, convinced that there was more to the earthquake than the government would admit, and it turns out he’s right. The reactor awakened two flying monstrous creatures (their flat heads make them resemble Gyaos, from the Gamera movies, but they aren’t Mothra, despite early internet reports) on different continents; these hideous beasts will travel the world toward each other, leaving destruction in their wake, in the hopes of mating.

And while the U.S. military (led by David Strathairn) insists on trying to use force to keep them apart — never mind that these monsters literally eat nukes for breakfast — scientist Ichiro (Ken Watanabe) and his sidekick Vivienne (Sally Hawkins) know that mother nature has provided a creature to restore balance. Cue the Big G’s theme music. (Actually, don’t; Alexandre Desplat provides an often-rousing score, but he’s chosen not to reference the familiar Akira Ifukube theme from the original Godzilla epics.)

Director Gareth Edwards (“Monsters”) gets the money shots right, but neither he nor screenwriter Max Borenstein (working from a story by David Callaham) makes the human characters interesting enough to get us through two mostly Godzilla-free acts. Three of the best actresses in contemporary cinema — Binoche, Hawkins and Elizabeth Olsen (as Ford’s wife) — are reduced mostly to set dressing, while Watanabe, Cranston and Strathairn get one note to play over and over.

As for Taylor-Johnson, he’s a very pretty blank here. While “Godzilla” stages many of its battles at night or in the rain, at least cinematographer Seamus MacGarvey (“The Avengers”) keeps things visible, unlike many of the murkier moments of “Pacific Rim.” IMAX audiences won’t be disappointed with the clarity of the action, even when it unfolds in foggy San Francisco. (To be fair, yes, this version is a marked improvement over the disastrous 1998 “Godzilla” from director Roland Emmerich. But that’s like saying the recent “Robocop” remake is better than food poisoning.)

Is it too much to ask that a “Godzilla” movie feature more Godzilla than, say, “Rosencrantz and Guildenstern Are Dead” features Hamlet? Sixty years after debuting on the big screen, Godzilla is still a global superstar; if Americans are going to build big-budget movies around him, they could at least give this legend more screen time. Esther Williams, after all, could be counted on to hit the pool within the first 10 minutes.