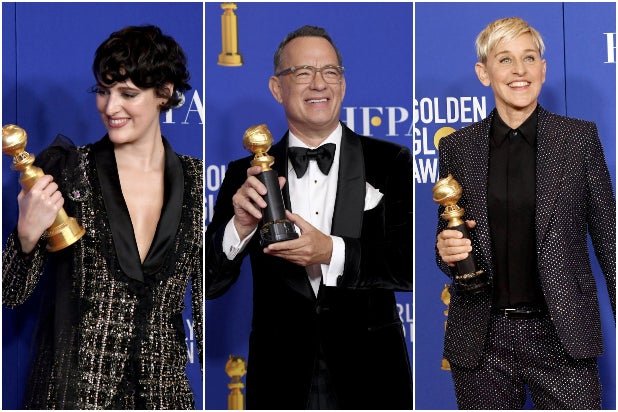 “1917” won two surprise awards, Ellen DeGeneres and Tom Hanks were among several who gave emotional and political speeches, and Ricky Gervais could not wait for the finish line, but the 2020 Golden Globes didn’t end there.

Here are 7 things you missed from the broadcast.

“I’m not in this for power, although I have some. I’m not in it for money, though man, am I rich,” Tom Hanks said to the journalists in the press room, reminding them that he was still sick but was glad to be backstage with this group.

His performance as Mister Rogers didn’t win him a competitive Golden Globe, so now everyone’s thinking about what’s next for him. What he’d really like to do is play “you” next, as in the person who asked him the question. But he did tease his upcoming project with Baz Luhrmann where he’ll play Elvis’ manager, Colonel Tom Parker.

“I will have answers to all your questions about why I’ve never played a bad guy. I think I’m about to do that,” Hanks said.

Joaquin Phoenix did not expect to be backstage in the press room after winning his Golden Globe for “Joker.” Phoenix said he was “pranked” and pushed into the room, and he seemed a bit perplexed that a room full of journalists would have been waiting here all night.

“Did they even feed you?” he asked them from the stage. “There’s more space in here than there was in there, so I hope you’re doing alright.”

But one of the stories of the night was the Hollywood Foreign Press Association’s decision to make the dinner – for both the attendees and the press room – completely vegan and plant-based. Phoenix praised the HFPA for the move and urged the other awards shows, including the Critics’ Choice Awards, the SAG Awards and the Governors’ Ball, to do the same.

“This is the first time I’ve ever eaten the food at this ceremony. I thought it was excellent,” Phoenix said, adding that he was “moved” by the decision. “I’ve never been so proud to attend an awards show as I was tonight.”

Ramy Youssef Was Going to Thank His God Anyway

Ricky Gervais turned some heads with his bleeped monologue joke, telling Hollywood to “accept your award, thank your agent and your god and f— off,” and as the first winner of the night, the Muslim star of “Ramy” Ramy Youssef was quick to do just that, thanking his god and saying “Allahu Akbar.”

Though backstage he said he was planning on doing that regardless of Gervais’ quip. While Gervais may famously be atheist, Youssef said he’s a man of faith.

“I’m very thankful to God and my show is about someone who believes in their faith,” Youssef said. “So I naturally don’t always feel like I’m on the same page with the comedic style of Ricky Gervais on that subject, although the Epstein thing was really funny. But yeah, that was something that is sincere.”

Also Read: Golden Globes Winners by the Numbers: 'Once Upon a Time... in Hollywood' Has a Fairytale Night

“Succession” star Brian Cox was very clear about one thing in the press room: he is not playing Rupert Murdoch.

“I am playing Logan Roy. Logan Roy is totally our creation. Rupert Murdoch has f— all to do with it, and you can quote me on that,” he said backstage in the Globes press room.

That hasn’t however prevented the Murdochs from sharing their opinions with Cox on the show. Cox revealed that while in a cafe in London, he met a man who said they are “loving the show.” The man then revealed that he’s actually Elisabeth Murdoch’s husband, and he had a small request.

“Can you go easier on her next season,” he told Cox. “We’ll do our best,” he replied.

Everyone from Laura Dern to Phoebe Waller-Bridge praised Ellen DeGeneres’ acceptance speech for the Carol Burnett award as they talked to the press, but DeGeneres herself had a few more words – and another shout out to her “husband” – in a quick appearance backstage.

“I think I am really happy for every single thing that happened in my life. I am happy for the people that didn’t support me,” DeGeneres said. “I’m happy for the times that were the hardest times of my life because I feel like that’s what makes you. If everything is easy, you don’t really have anything to compare it to. So I’m really grateful for all of the hard times, all of the things that didn’t work out the way I wanted them to work out, and I feel bad for people that have everything working all the time because that’s just not life. Life doesn’t work that way. So I’m just grateful for my journey and, of course, my husband Mark.”

Yep. If there should ever be a reason for one, as he was asked. “I mean, I don’t think I even consider it working doing those films because we have so much fun together. So I would consider doing it, yes,” he replied.

Next however Skarsgard says he’s doing a small film with a Chinese director that he’s not allowed to speak about just yet.

In the parade of stars who filtered through the press room after the show ended, “Rocketman” director Dexter Fletcher managed to sneak into the gallery where all the reporters were sitting and shouted at his star Taron Egerton about how “amazing” and “brilliant” Egerton was, all while Egerton tried to answer questions on stage.

Egerton himself was a little distracted, as he took a moment before jumping on stage to shake Renée Zellweger’s hands and introduce himself as the two were crossing paths.