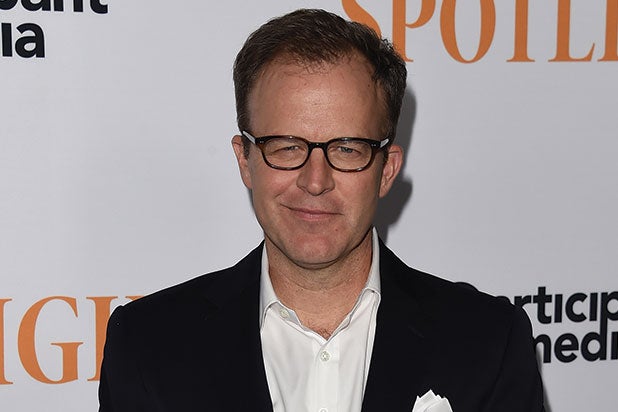 Tom McCarthy’s critically acclaimed film “Spotlight” was nominated for Golden Globes in three categories — Best Motion Picture, Drama, Best Director, and Best Screenplay — but one of them meant a little more to him than the others.

“Obviously, being a director especially with so many good films this year, that’s special,” McCarthy told TheWrap shortly after the nominations were announced at the Beverly Hilton Hotel in Beverly Hills, Calif. on Thursday. “I take a lot of pride in the work I do. It’s nice to be singled out in that way. It’s great to hear your name being called, and you feel as a director of the film, it’s really rewarding when a film gets honored like that.”

McCarthy was making waffles for his daughter when the film’s cowriter, Josh Singer, called him about the Best Screenplay nomination, which was the first of the three to be revealed. “That’s the great thing about being a cowriter — you get to share this moment with someone else,” said McCarthy.

The drama that chronicles the true story of how Boston Globe journalists broke the the molestation scandal surrounding the Catholic Church in 2001 has resonated with audiences since its premiere at the Venice Film Festival in September. It boasts a Rotten Tomatoes score of 98 percent, making it the fifth best movie of the year on the website.

According to him, lawyers of victims and survivors frequently came up to him and the cast after screenings, and many more victims have come forward for the first time after seeing the film.

“I’ve received emails from the actors and they are happy that the movie was nominated,” he said. “These guys are pros — they know it’s incredibly competitive with a lot of great performances out there. We are all just very happy for the film.”

Another nominee shocker this morning was Peter Dinklage, who did not receive one for his role in “Game of Thrones.” McCarthy gave Dinklage his first major role in “The Station Agent,” paving the way for his breakout success on the HBO series.

“Peter’s body of work speaks for itself,” McCarthy said of the snub. “It has gotten a lot of recognition, and he knows at this point in his career that he is a great actor. I’m sure he’s handling it well. It’s surprising, but like I said, it’s incredibly competitive. It’s hard to play the blame game.”

All in all, McCarthy is happy that the film is shedding light on the issue, as well as highlighting the positive impact of investigative journalism.

“It’s a validation for everybody on some level and we all felt fortunate to tell the story,” McCarthy added. “We made a very entertaining movie, but at the end of the day the movie is about institutional abuse, and it’s really hard to make a movie like that these days. It’s a good day.”