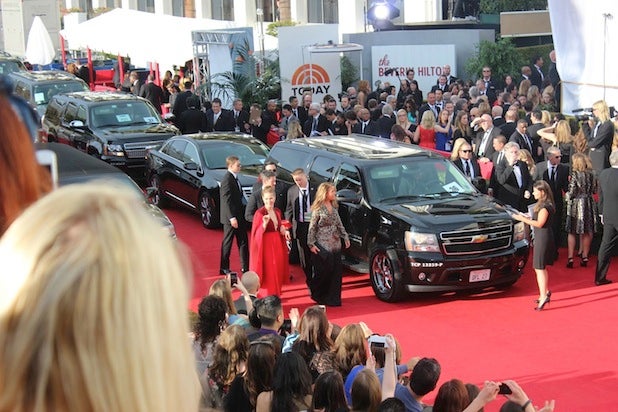 At the other extreme of the excitement and high fashion of the Golden Globe Awards, you’ll find us: The Bleacher Creatures.

We’re the ones generally relegated to those ubiquitous silver benches lining red carpets at awards ceremonies.

While TheWrap was reporting from the lavish parties at the Golden Globe Awards this year, I’d like to give you the Bleacher Report, or the take from my vantage point at these awards.

Getting an invitation from my local NBC television station, KNSD, to assist with social media from the VIP Bleachers at the Golden Globes was certainly a score for this Hollyblogger. So what do the celebrated awards look like from behind the barricades inside the venue?

Well, let me tell you. It’s all BUT glamorous. I was there, at the very top of the stands … for six hours.

The day started early by getting to the designated shuttle pick-up spot and transported to the venue. Once there, plenty of security shepherded us in, walking ON the red carpet, and shouting orders to “keep it moving.”

Quite in contrast to the glitz and glamour required for the Golden Globe’s red carpet, those lucky to get to sit on the bleachers in the perimeter of the limousine arrivals area of the red carpet are dressed down. Expressly stated in the invitation were instructions to dress in “colorful clothes” to increase the chances of being placed right up front of the barricades.

The fan production team wrangling us up high on the silver benches had a tough job. While a few were unhappy about how random the selection process to end up at the bottom of the bleachers — where the likelihood of a close encounter with a star was more probable — had obviously not been determined simply by the clothes color-coded requirement, others sitting on the metal stands just felt lucky to be there.

The stands along the red carpet lining the media outlet areas are a different beast altogether. Ours were part of the pre-award show’s production team, and we served as the background crowd cheers for both the E! and the NBC pre-award show Arrival Special.

The 20+ foot width of the red carpet distancing us from the celebrity arrivals area meant we had to scream and beg for the stars to turn around and acknowledge us with a wave, a smile, or in the case of a handful of stars, a jaunt across the carpet to the holding area.

One of our producers at one point was the one and only Tom Hanks! He couldn’t get enough of us fans.

From his spot on the NBC Golden Globe Arrivals Special interviewing podium, the “Captain Phillips” star waved and directed us to chant “NBC” at the top of our lungs. And when Tom Hanks tells you to do it, you do so loudly!

As the memorable moments inside the Beverly Hilton Hotel got started, the bleacher people also had theirs. And Just like any awards show, the fans would like to hand out some of our own awards.

The Silver Bleacher Awards go to the stars who graciously acknowledged our presence by bravely abandoning the safety of their entourage to meet and greet the Bleacher Creatures.

The winners in this category are: Matthew McConaghey, Jimmy Fallon, Mike Tyson, and Sean “Diddy” Combs. They went against their publicists’ better judgment and crossed to the “other side” of the Red Carpet to high-five and pose for selfies with fans. (A special mention here for McConaughey and Tyson who posed for a photo with each person lining the bottom barricades.)

The Brave Silver Bleacher Award goes to Ryan Seacrest. He was the only celebrity to climb to the top bleachers, E! News microphone in hand, and pose for photos with the fans all while reporting live.

The Luke Warm Silver Bleacher Recognitions go to those who gave us faint waves or a look-see. The winners are: Ron Howard, Kevin Bacon, Jim Parsons, Sandra Bullock, Jessica Lang, and Amy Adams (though the photo might suggest her dress was constricting her otherwise big-wave intentions).

And like all awards lists, this one includes some snubs, too.

We did not get any joy, not even a glance, from Julie Bowen, Olivia Wilde, Emma Watson, Judd Apatow, and Emma Roberts in spite of our loud requests. As for sitting there for six hours, the production team made sure we had port-a-potties, plenty of water, and boxes and boxes of snack-sized Lays products. No food or coffee. And if you dared to try to go into the Beverly Hilton’s Starbucks, you would be threatened to be escorted all the way out and not come back. BYO next time.

Nonetheless, the thrill of being present for a close-up view of some of our favorite actors and their magnificent gowns and tuxes, impeccable hair (admittedly not in every case), and perfectly matt make-up was well worth the half-day discomfort.

Would I do it again? Absolutely.

The Oscars are only a few weeks away! (Hint)