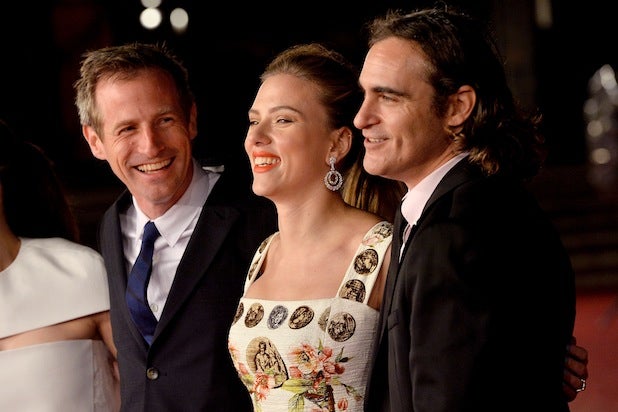 Scarlett Johansson may have a chance to win some awards this season for her voice-only performance as the operating system in Spike Jonze‘s “Her,” but a Golden Globe won’t be one of them.

The actress’ performance as the disembodied voice with which Joaquin Phoenix‘s character falls in love has won raves from many who’ve seen the film in advance screenings. But the part has fallen victim to a Hollywood Foreign Press Association rule that says voice performances are not eligible for acting awards, an HFPA source confirmed to TheWrap.

Johansson (pictured above with Jonze and Phoenix) is, however, eligible for the Screen Actors Guild Awards and the Oscars.

Also read: ‘Her’ Review: She’s Virtual, But You Can’t Have Everything

The Globes have restrictive rules in other categories as well. Earlier this year, they tried to disqualify the Swiss documentary “More Than Honey” from the Best Foreign Language Film category on the grounds that it was a doc, and docs weren’t eligible for the Globes.

Only when confronted with evidence that there was no such rule in their books did they relent, and allow it to be submitted – although the HFPA also instituted a new rule that will specifically disqualify documentaries from the category in the future.