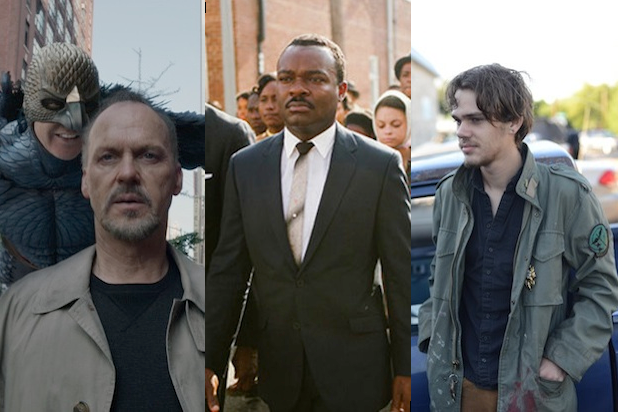 In their continuing quest to rob us of reasons to make fun of them, Golden Globe voters on Thursday revealed that they’re pretty much in the mainstream when it comes to recognizing the best films of 2014.

The 80-odd members of the Hollywood Foreign Press Association went for “Birdman” and “Boyhood,” for “The Imitation Game” and “The Theory of Everything,” for Eddie Redmayne and Michael Keaton, Julianne Moore and Reese Witherspoon, J.K. Simmons and Edward Norton, Patricia Arquette and Meryl Streep.

If there was a takeaway from the nominations, it was that this year you can’t accuse the HFPA of simply nominating people they want to see show up at their awards show — if that had been a priority, it’s hard to imagine that Angelina Jolie‘s film “Unbroken” would have been shut out, or that longtime Globe favorite Clint Eastwood‘s “American Sniper” would have met the same fate.

Even in the much-maligned Comedy or Musical categories, often the province of the most blatant star-searching, voters opted for pretty sensible choices.

If one is to go by the nominations alone, the drama race is now between “Boyhood” and “Selma,” the comedy race dominated by “Birdman” — though it could be time to stop underestimating Wes Anderson’s “The Grand Budapest Hotel,” whose three nominations included a surprising one for Best Director.

Also on the stop-underestimating-me list: Jake Gyllenhaal (“Nightcrawler”) and Jennifer Aniston (“Cake”), whose Globe nominations on top of Wednesday’s SAG noms suggest that they may no longer deserve to be considered longshots in the acting categories. (Warning: Oscar voters may beg to differ.)

Anecdotal evidence suggesting that Globe voters didn’t really care for “Foxcatcher” was contradicted by the fact that they gave Bennett Miller’s drama three nominations, including a key one in the Best Film, Drama category, where it got in ahead of “Unbroken,” “Sniper” or “Gone Girl.”

But “Gone Girl” director David Fincher landed a key nod in the Best Director category, reinforcing how evenly the voters spread the wealth.

Those with reason to be disappointed include Chris Rock, whose “Top Five” didn’t get any traction with Globes voters. Neither did “Begin Again,” which once seemed a natural for comedy/musical. (It had Keira Knightley and Mark Ruffalo and it was backed by Harvey Weinstein, who had to be content with a strong showing for “The Imitation Game,” two for “St. Vincent” and a trio of noms for “Big Eyes”).

And Laura Dern lost out on a supporting nomination for “Wild” for the second morning in a row; after Naomi Watts landed a shocking nomination for “St. Vincent” on Wednesday, the spot went to the far less unexpected Jessica Chastain for “A Most Violent Year” on Thursday.

In the best song category, where the Globes always seem to look for stars, they’ve got Lana Del Rey (the title track from “Big Eyes”), John Legend and Common (“Glory” from “Selma”) and Lorde (“Yellow Flicker Bird” from “The Hunger Games: Mockingay Part One”), plus a new song from “Annie” and, in what could be a delightful bit of incongruity on the red carpet, legendary punk priestess Patti Smith for “Mercy Is” from “Noah.”

Overall, though, the quirks were few and the opportunities to mock the HFPA even fewer. Heck, this is a year in which the Hollywood Foreign Press nominated “Nightcrawler” and “Foxcatcher” and “A Most Violent Year” and “Leviathan,” and even freaking Patti Smith.

If that’s not enough to give them a pass from the usual mockery, I don’t know what is.