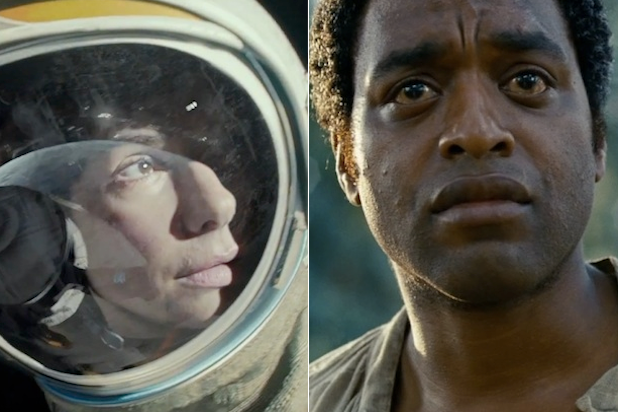 Some of us spend a lot of time trying to figure out what the 6,000-plus voting members of the Academy of Motion Picare thinking, but we’re less certain when it comes to the 80-odd members of the Hollywood Foreign Press Association.

But on Sunday night, the votes cast by the HFPA, an organization of Los Angeles based journalists (and part-time journalists) for foreign outlets, will take center stage at the Golden Globes.

On the TV side, the HFPA can be ahead of the curve, which adds an extra element of surprise to an awards show famous for unexpected moments.

Will win: “Gravity.” “12 Years a Slave” is the clear critics’ favorite so far, but I hear that HFPA voters like “Philomena” and “Rush” better than they like that movie. But I heard they liked “The King’s Speech” better than they liked “The Social Network” three years ago, and that didn’t stop them from giving the award to the consensus critical favorite. They could do the same thing this year with “12 Years,” but I think it’s more likely that they go for the other Oscar frontrunner, “Gravity.” “Captain Phillips” could possibly stage an upset.

Should win: “12 Years a Slave,” though it’s undeniably a tough sit.

Will win: Cate Blanchett, “Blue Jasmine.” Globes voters might love Dench and Thompson, but nobody is beating Blanchett in this category.

Also read: How Cate Blanchett Got Ready to Play a Boozer in Woody Allen’s ‘Blue Jasmine’

Will win: Matthew McConaughey, “Dallas Buyers Club.” Ejiofor is a likely Oscar frontrunner, Redford would provide a big emotional moment and Hanks is the king of Hollywood. But after losing 40 pounds and enoying a terrific year that also includes “Mud” and “The Wolf of Wall Street,” McConaughey will charm the pants off the room, and voters will give him that chance.

Should win: Robert Redford, “All Is Lost.” In a very tough category, Redford’s degree of difficulty (he doesn’t talk) might be even higher than McConaughey’s.

Will win: “American Hustle.” It’s questionable whether many of the nominated films belong in the category – and if “Saving Mr. Banks” hadn’t insisted on being submitted as a drama, it might have had a good shot here. But David O. Russell’s “American Hustle” has lots of big stars, a hot director and critical approval – it’s close to a lock.

Should win: “Inside Llewyn Davis.” With my three favorite movies of 2013 in this category, I’d go for “Llewyn Davis” in a squeaker over “Her” and “Nebraska.”

Should win: Greta Gerwig, “Frances Ha.” I’d go with one of the two women who also co-wrote their films. Gerwig wins by a hair over Julie Delpy.

Will win: Leonardo DiCaprio, “The Wolf of Wall Street.” Bale, Dern and DiCaprio are all legitimate possibilities. I’m guessing star power and acting fireworks win out, and the Globe goes to DiCaprio.

Should win: Oscar Isaac, “Inside Llewyn Davis.” I’d find it incredibly hard to choose between Dern and Isaac, but I’ll give it to the latter because he also had to learn a new (old) style of guitar playing and master an entire repertoire.

Will win: “Frozen.” The HFPA decided before nominating that this year’s crop of animated films only warranted three nominees – and while DreamWorks Animation has put on a full-court press on behalf of “The Croods” and Universal has done the same for “Desicable Me 2,” I suspect voters will go for the film that’s 15 to 20 percentage points higher than the others on Rotten Tomatoes.

Should win: “Frozen,” I guess. The three animated films I would have preferred – “Ernest & Celestine,” “The Wind Rises” and “Is the Man Who Is Tall Happy?: An Animated Conversation With Noam Chomsky” – weren’t eligible.

Will win: “Blue Is the Warmest Color.” It might be too much for some voters, but also has that Palme d’Or to give it cachet. Plus, it’s a way to stick it to the Academy by giving the award to a film that isn’t eligible for the foreign-language Oscar. Its chief rival just might be “The Wind Rises,” an animated feature that could be the beneficiary of the feeling among some voters that it ought to have been eligible in that category.

Should win: “Blue Is the Warmest Color.” By a wide margin.

Also read: Sex, Lies and Invective: Inside the Whole ‘Blue Is the Warmest Color’ Mess

Should win: Lupita Nyong’o. While I love Squibb and Hawkins and think Lawrence makes the most out of every one of her scenes, Nyong’o’s is the performance that lingers.

Will win: Jared Leto, “Dallas Buyers Club.” Leto has won almost everything else, and there’s little reason to think he won’t win this too.

Should win: Jared Leto. (And I’d pick him even if James Franco were on the ballot for “Spring Breakers.”)

Will win: Alfonso Cuaron, “Gravity.” Russell has a chance and McQueen could win if voters want to make history, but “Gravity” is such a technical accomplishment that voters will recognize it. (Remember, the Globes don’t have cinematograpy, editing, sound and visual effects categories that “Gravity” would otherwise dominate.)

Should win: Alexander Payne, “Nebraska.” Cuaron did wonders, but I’d give this one to Payne for the deft balancing act he pulls off in turning the slow-paced “Nebraska” into a sparkling blend of tragedy, comedy and heart.

Should win: Spike Jonze, “Her.” The movie shouldn’t work, but it does, beautifully. Jonze deserves credit somewhere.

Will win: Steven Price, “Gravity.” Unless voters are in the mood to give 25-time nominee John Williams his fifth win (which they could be), this race might be between the big, assertive score to “Gravity” and the quiet, subtle one to “12 Years a Slave.” Give the nod to the bolder entry.

Should win: “Gravity.” On CD, there’s something annoying about the way “Gravity” constantly relies on big crescendos abruptly cutting to silence. But onscreen, in a movie that pays some attention to the fact that there’s no sound in space, Price uses percussion and vibration in a way that’s absolutely essential to making the movie an immersive experience.

“Breaking Bad” has dominated the television talk this year. We can’t imagine the Hollywood Foreign Press will stray from the trend. Plus, it deserves it.

“Orphan Black” star Tatiana Maslany is a strong candidate for the win as the Globes likes to go with first season breakthrough stars. But, we’re going to go with an ongoing favorite and a slightly new star for our picks.

See above regarding “Breaking Bad.” They own this past year. But, we have nothing but respect for every guy in this category, specifically “House of Cards” star Kevin Spacey.

Points for freshman Fox comedy, “Brooklyn Nine-Nine,” but again we’re going to with series that have proven some staying power.

Should win: “Parks and Recreation”

Don Cheadle won last year, but “House of Lies” has lost a lot of buzz since then. Once. “Brooklyn Nine-Nine’s” Andy Samberg is an attractive pick here, but we’re thinking there’s something about having a veteran return to TV.

BEST TV MOVIE OR MINISERIES
Nominees: “American Horror Story: Coven”; “Behind the Candelabra”; “Dancing on the Edge”; “Top of the Lake”; “White Queen”

We thoroughly enjoyed Sundance’s “Top of the Lake” and Starz’s “White Queen,” but we think FX’s “American Horror Story: Coven” is the best installment of the show yet. But, “Behind the Candelabra” will probably take the prize for its movie star leads and over-the-top staging.

Will win: “Behind the Candelabra”

Jessica Lange is a wonder to behold on “American Horror Story: Coven,” but she won’t get the prize. We think this contingent will throw its vote to an international entry.

Two noms for the “Behind the Candelabra” stars: Will they split the vote? We’re crazy for Idris Elba on “Luther,” but we think that Michael Douglas will get the nod.

Will win: Michael Douglas, “Behind the Candelabra”