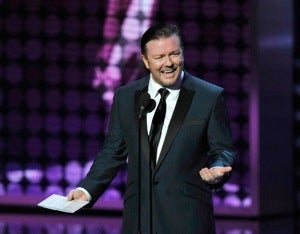 The new Oscar hosts have gotten advice from Steve Martin and Alec Baldwin and Hugh Jackman, and now they can add some unsolicited (and, I suspect, unwanted) tips from Golden Globes host Ricky Gervais. On his blog, Gervais has written an opening monologue – sorry, I mean dialogue – for the two to deliver. It starts out fairly snarky (“Presenting awards tonight will be a string of Hollywood legends and some other actors who have a film out in March or April”), but keeps relentlessly circling back to jokes about … Ricky Gervais, and how rude and obnoxious he is. And it ends with a joke that Steve Martin did a version of on the Oscars 10 years ago. (It’s at the eight-minute mark on this YouTube video.) So I’m thinking that Ricky doesn’t really expect Anne and James to take him up on his generous offer. (RickyGervais.com)

Who are the Oscar voters? They’re based in Southern California, they’re male “by a small majority” and they have an average age of “about 57,” according to Tom Shone. (I wish he cited a source for his stats.) He also runs through the recent history of the organization and the more adventurous choices its members have been making lately, smells “the whiff of generational warfare,” and concludes this: “[T]he average voter is neither a finger-snapping, Cahier-du-Cinema-reading hepcat [that’s  his idea of youth?] nor a dozing old fart … In all probability, they’re Godard fans; they’re just Godard fans with kids.” (The Guardian)

One of the toughest races to predict, meanwhile, is Best Director. Sasha Stone takes a smart approach to the “Fincher or Hooper?” question by looking at which man might be preferred by supporters of the films whose directors aren’t nominated (i.e., “Inception,” “127 Hours,” “Toy Story 3” … ). Between that and a run through the history of the years in the 1930s and ’40s when the Academy previously had 10 Best Picture noms, she finds reason to think that Fincher might well take Director even though Hooper’s film will win Picture. I think those bygone races took place too long ago to be relevant, but the consensus in favor of a split seems to be building. (Awards Daily)

When it comes to predictions, Kenneth Turan doesn’t want to know. “What I am not so happy about is the orgy of forecasting, guesswork and entrails reading that goes on and on and on in the weeks and months preceding the big show,” he writes, “all in an attempt to figure out who is going to take home the prizes.” His big complaint: the pundits are too often right, which spoils it for him. As somebody who does a lot of predicting, I’ll say that it’s not my favorite part of the job, either … but hey, if the sportswriters and oddsmakers spend so much time and energy trying to forecast the results of the big games, can’t we do the same with our version of the Super Bowl? (Los Angeles Times)

Karina Longworth surveys the Oscar landscape, decides that “The King’s Speech” is going to win, and doesn’t like that one bit. She’d rather that Harvey Weinstein threw his campaign muscle behind “Blue Valentine” and “The Company Men” instead of the frontrunner that, she says, “best embodies the middlebrow sensibility that other Best Picture nominees, in the foundational spirit of the indie institutions that nurtured their makers, seem like a defiant reaction against.” Still, she concedes (grudgingly?) that the emotional response of viewers to “The King’s Speech” are probably valid. (LA Weekly)

“Winter’s Bone” Debra Granik has been a steady and low-key presence on the awards circuit this year, clearly far less comfortable in the spotlight than directors like Tom Hooper and Danny Boyle. She says as much in an enlightening interview with Andrew Purcell, where her final lines perfectly sum up the conflict of quiet indie director in a big loud world: “If this interview were never to be published in English, I could tell you my true feelings about the Oscars. But I’ve been incredibly cooperative. I have obtained a garment. I must keep a vow, which is that I’m going there to watch a circus. This year it’s a celebration of all kinds of films, which is beautiful.” (The Guardian)