Are you sick of seeing Donald Trump’s mug every time you go online? Do you love cats?

If the answer to either of these questions is “Yes” then the “Make America Kitten Again” extension from Google Chrome is for you.

Simply download the extension and the magic of the internet will turn every photo of the president-elect into an adorable pic of a fluffy kitten — or a cluster of cute little cats if you’re lucky.

We tried it with a New York Times article about Trump promising “safe zones” in Syria, and voila — it suddenly has a kitten playing with a stuffed penguin as its main image (see above).

Business Insider warns that there is a set number of photos in the MAKA kitten portfolio, so you may see some repeat kittens, but isn’t that better than seeing Trump over and over and over again?

Also Read: Donald Trump Already Has His Own Water-gate (Photos)

And yes, there are some ginger tabby cats in the mix that bear an eerie resemblance to the future POTUS.

Check out Trump’s new unorthodox cabinet captured on The Hill below. 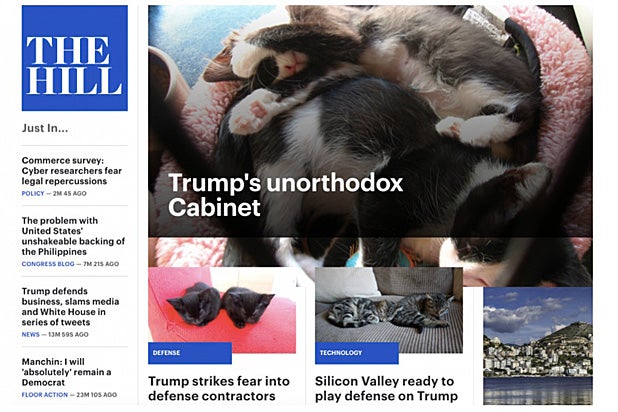