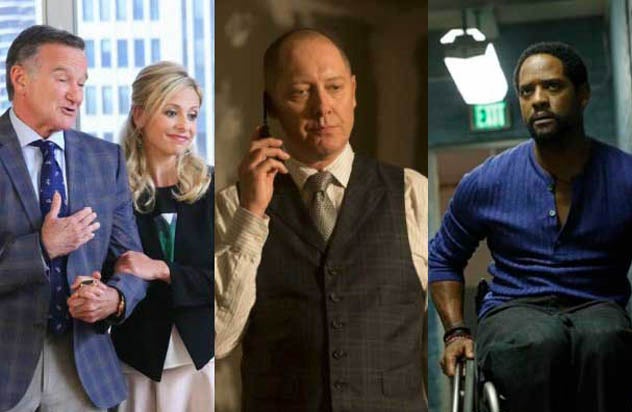 Things used to be so easy for big names: Movie stars who switched from movies to TV used to dominate their new medium like a fighter punching below his weight. Kiefer Sutherland got eight seasons of “24” and won an Emmy for his performance. James Spader got three Emmys and solid ratings for “Bostin Legal” and “The Practice.” Glenn Close won back-to-back Emmys for “Damages.”

Thanks in part to an influx of movie stars, TV has more prestige than ever. Stars we never expected on TV — including Meg Ryan, Susan Sarandon and Robert De Niro – are signing up for small-screen projects. But as several shows this season once again prove, no one is guaranteed a smooth ride.

It’s a lesson Dustin Hoffman learned when even his undeniable talent couldn’t save HBO’s “Luck.” And A-listers may be starting to crowd each other out. Kevin Spacey’s move to Netflix generated lots of hype and Emmy nominations for “House of Cards,” he didn’t score a win for Outstanding Actor in a Drama Series. It went to another movie-turned-TV star, Jeff Daniels.

So who are the new Spaders and Hoffmans? Four weeks into the new season, we looked at the biggest names on TV’s biggest shows to see whose have had the best debuts.

Clark Gregg, “Agents of S.H.I.E.L.D.”
Gregg isn’t a household name, but he had a pivotal role in “The Avengers” and other Marvel films. The box-office success of those films has helped make “S.H.I.E.L.D.” the biggest new show of the season in Live + 7 numbers measuring a week of viewing: It has a 4.5 rating in the key 18-49 demographic. Of course, not all of that is because of Gregg: “S.H.I.E.L.D.” is a true ensemble. But Gregg is the bridge between the blockbuster films and the TV show, and he’s as affable a lead as he was a supporting character. ABC has not surprisingly ordered a full season.

Nicole Beharie and Tom Mison, “Sleepy Hollow”
Neither of the “Sleepy Hollow” leads are huge stars – yet. But both were TheWrap‘s list of 17 Breakout Stars of the Fall Season, and their show ties “The Blacklist” with a 4.3 rating. Beharie — who was great in “Shame” and as Mrs. Jackie Robinson in “42” — anchors “Sleepy Hollow” as the only person who takes Mison’s Ichabod Crane seriously. Fox has already renewed the show for a second season.

James Spader, “The Blacklist”
James Spader remains the James Spader of television: a guy who still shines in big screen films (he was a highlight of “Lincoln”) but lately has been at his best on TV. “The Blacklist” is averaging a 4.3, and has held its audience consistently. It’s helped NBC lock up Monday nights and become the top-rated network of the season-to-date. It also scored a full-season order.

Robin Williams and Sarah Michelle Gellar, “Crazy Ones”
Williams and Michael J. Fox are arguably the biggest movie stars turning to TV this season. Williams boasts a string of hits and an Oscar for “Good Will Hunting” in the three decades since “Mork & Mindy.” Gellar may always be best known as TV’s “Buffy The Vampire Slayer,” but she was fairly successful with the “Scooby-Doo” and “Grudge” films, as well as “Cruel Intentions.” Together, they lead a show averaging a 3.5. That makes it the best-rated new sitcom of the season, and the fourth highest-rated new show overall.  That’s not embarrassing, but it’s not jaw-dropping, either, considering all the movies Williams has toplined. The show has gotten a full season order, along with “The Millers” and “Mom.”

Will Arnett, Beau Bridges and Margo Martindale, “The Millers”
All three leads have bounced between movie and TV roles in recent years. Arnett is the most TV-centric, after starring in “Arrested Development,” “Up All Night,” and “Running Wilde.” So far, “The Millers” is his biggest success. It’s averaging a solid 3.4 rating, despite some iffy reviews. (Critics really didn’t like a flatulence joke in the premiere.) Bridges scored last year with a strong supporting turn in “The Descendents,” and Martindale was memorable in “Orphan” and “Million Dollar Baby,” but has been especially great on FX’s “The Americans” and “Justified,” winning an Emmy for the latter. Interestingly, Bridges and Martindale appear together this season on Showtime’s drama “Masters of Sex” as well as playing feuding spouses on “The Millers.”

Rebel Wilson, “Super Fun Night”
Wilson has had a great run at the movies with “Pitch Perfect” and “Bridesmaids,” but her roots lie in Australian television. She’s doing okay on American TV: Her show has fallen from a splashy debut, but still averages a solid enough 2.8 rating.

Jeff Garlin, “The Goldbergs”
Garlin is beloved for his role as Larry David’s alternately brash and cowering manager on “Curb Your Enthusiasm,” and on ABC’s ’80s sitcom, he’s managing a respectable 2.7 rating.

Andy Samberg, “Brooklyn Nine-Nine”
The king of the digital short didn’t make as big a splash as he’d hoped co-starring with Adam Sandler in “That’s My Boy,” but the well-reviewed “Brooklyn Nine-Nine” suggests the “Saturday Night Live” vet may be at his best on TV. The show has suffered from a weak lead-in – “Dads” – and has a so-so 2.3 rating. But Fox has cast a big vote of confidence by ordering it for a full season and announcing it will air it in the hour after the Super Bowl.

Michael J. Fox, “The Michael J. Fox Show”
What a run Michael J. Fox had in the ’80s: the “Back to the Future” trilogy, “Teen Wolf,” respectable dramatic turns in “Casualties of War” and “Bright Lights, Big City.” He slowed down in the 1990s but still did good work in “Mars Attacks” (with Close) and “The American President.” Later he delivered memorable performances on “Curb Your Enthusiasm,” “The Good Wife,” and “Rescue Me” before returning to NBC with his own show. Unfortunately, it’s struggling, along with the rest of NBC’s Thursday night lineup. “The Michael J. Fox Show” averages a 2.2 rating, which NBC hopes to improve with some reshuffling. On Friday, it canceled “Welcome to the Family,” which had been a speed bump in the night’s lineup. NBC ordered 22 episodes of the show last season, and NBC entertainment president Jennifer Salke says says are “ongoing” about whether they’ll all air.

Tony Shalhoub, Jerry O’Connell, Kal Penn, “We Are Men”
Shalhoub, O’Connell and Penn are all pretty big names — co-star Christopher Nicholas Smith was a bit lesser known — but all that familiarity couldn’t save “Men” from being the second show to be canceled this season. It had averaged a 2.1, not good enough for CBS.

Dylan McDermott and Toni Collette, “Hostages”
What happened here? CBS’s political drama has two stars with impressive film and TV credits, yet their show averages a mere 2.0. Part of the problem is that they face off with Spader on Mondays at 10. Together, they look like a couple of Hoffmans: undeniably good, but not connecting. The show is scheduled for 13-episode season, and it’s chances of renewal don’t look good. But there’s hope: Its ratings were up this week over last.

Malin Akerman, Marcia Gay Harden and Bradley Whitford, “Trophy Wife”
No one can question Harden’s acting credentials: She won an Oscar for “Pollock” and was excellent in “Mystic River.” If you need proof of the shortage of great roles for actresses over 40, note that she’s also been in weird schlock like the TV movie/anti-oral-sex propaganda film “She’s Too Young.” Whitford, like Janney, will also have a special place in our hearts because of “The West Wing.” Akerman brightened up “Watchmen,” “Couples Retreat” and “The Heartbreak Kid,” even if she wasn’t an above-the-title star. Unfortunately, “Trophy Wife” hasn’t won any awards: It averages a 1.9.

Giovanni Ribisi and Seth Green, “Dads”
Ribisi was in a fairly successful film called “Avatar” and Green was great in the “Austin Powers” films. Ribisi also appeared in shows like “Friends” and “My Name Is Earl.” Green has done lots of TV, even co-creating “Robot Chicken.” Martin Mull and Peter Riegert, the dads of the title, have bounced between TV and film. But all that experience has only added up to a weak 1.9 rating for “Dads,” one of critics’ least-favorite shows of the new season. Fox has ordered more scripts of the series, but hasn’t picked it up for a full season.

Blair Underwood, “Ironside”
Fond memories of “L.A. Law” — and plenty of roles since then — couldn’t keep the paraplegic detective drama on the air. It’s been canceled after averaging a lowly 1.3.

Sean Hayes, “Sean Saves the World”
Hayes’ comedy is fighting for its life after its lead-in, “Welcome to the Family,” was canceled. Salke has said that when it comes to Thursday nights, NBC wants  to “support the shows that we think still have a chance to really build.” Whether Sean survives will depend on how it does this week without “Family” providing a weak setup. Hayes’ history with NBC — he broke out on “Will & Grace” — has no doubt bought him some time. But how much more will it get? It’s averaging a 1.3, the same as ABC’s “Lucky 7,” the first show to be canceled this season. (“Family” averaged a 1.0.)