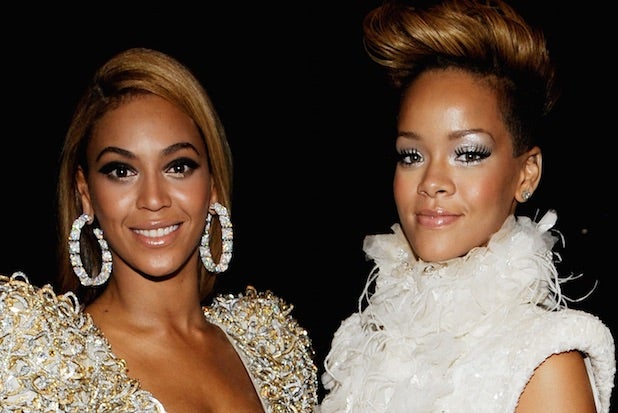 Beyonce and Rihanna at the Grammys / Getty Images

This year’s nominations for the 59th Grammy Awards once again showed that diversity is a keyword for the Recording Academy, which is never in any danger of being hit with a #GrammysSoWhite protest.

The top categories include the Grammys’ usual mixture of musical styles, from R&B to pop to country, but they can’t hide an inescapable fact: The center of popular music, as reflected in the Grammy nominations, is hip-hop and its offshoots.

Four of the five most nominated artists — Beyonce, Kayne West, Rihanna and Chance the Rapper — are black; the fifth, Drake, is a Canadian hip-hop artist of mixed race.

Beyonce led the field with nine nominations, while Drake, West and Rihanna got eight and Chance the Rapper got seven. The top white artist, Adele, landed five nominations, tying her with white rapper Tyler Joseph (from Twenty One Pilots).

Yes, the Grammy Awards juries that pick nominees in the top categories — Album of the Year, Record of the Year, Song of the Year and Best New Artist — have been going out of their way in recent years to reflect a variety of styles in those nominations.

This year, that meant country singer Sturgill Simpson’s “A Sailor’s Guide to Earth” made a surprise appearance in the Album of the Year category. And it meant a Best New Artist field that included country-pop singer Kelsea Ballerini, dance music DJs the Chainsmokers, country singer Maren Morris, hip-hop artist Anderson .Paak and an artist whose name explains everything you need to know about his genre, Chance the Rapper.

But black artists dominate the Grammys these days, both in the Rap and R&B categories and in the collaborations and genre-hopping experiments that show up in other categories as well. Beyonce, for example, was nominated in the pop, rock, rap and R&B categories, as well as the music video and general fields; Rihanna is in pop, R&B and urban contemporary.

“As a former musician, I look at the landscape this year and it appears to me that artists are feeling more creative freedom, with more opportunities and more desire to take risks,” Recording Academy President Neil Portnow told TheWrap. “Artists are really wanting to experiment, to be genre-bending, to follow their own music. And the public is up for taking that ride with these artists.”

The Grammy Awards also loosened the rules this year to allow music that was made available only via a streaming platform to be eligible, a change that made Chance the Rapper’s “Coloring Book” eligible.

Also Read: Chance the Rapper, A24 Team Up for Secret Movie 'Slice'

That judging may have shortchanged a few artists expected to land nominations in the top categories: The late David Bowie received four nominations, but he didn’t make it into the Album of the Year category, where his magnificent and daring swan song “Blackstar” was thought to be a real contender.

Kanye West’s “The Life of Pablo,” Sia’s “This Is Acting,” Rihanna‘s “Anti” and Radiohead’s “A Moon Shaped Pool” also missed out in that category — though Radiohead did land in the delicious Best Alternative Music Album race, which has a decades-spanning lineup that includes old compadres Bowie and Iggy Pop competing against each other, and against much younger inheritors Bon Iver, PJ Harvey and Radiohead.

It wouldn’t be the Grammys without some strange bedfellows like that, and like a Best Traditional Pop Vocal Album category that features the croaky Nobel laureate Bob Dylan, the Gershwin-crooning Willie Nelson, the classically bred vocal cords of Andrea Bocelli and the Broadway-style pop of Barbra Streisand and Josh Groban.

Missing from the nominations is Frank Ocean’s acclaimed album “Blonde,” but that couldn’t be helped: Ocean declined to submit his album for Grammy consideration.

“When you’re at the pinnacle of what you do the way we are, you’re never going to have 100 percent buy-in from everybody,” said Portnow. “As we’ve shown in the past, we have tremendous respect for Frank Ocean and his artistry. Whatever his personal thoughts or his agenda is, it’s up to him. We’d rather have him in the mix than not.”

Kanye West, incidentally, threatened to boycott the Grammy Awards if Ocean wasn’t nominated. We’ll see on February 12 if he makes good on that threat.